Pretty much everyone who’s taken a musicology course in the US has heard the name Frances Densmore. She was one of the pioneers of ethnomusicology, a scholar who traveled the country in the early 20th century recording somewhere between 2000 and 3500 samples of Native American music and speech and publishing ethnographies which integrated her analysis of these recordings with relevant cultural information from the tribes involved. Her work defined the discipline of ethnomusicology. Because of that influence, many scholars have since turned a critical eye toward her work, aiming to better understand her methods and motivations as she worked with Indigenous peoples. While the scope of her work is admirable and she single handedly created a historical record for cultural information that might otherwise have been destroyed by cultural genocide, Densmore’s work can be problematized due to exploitation and what we’d now think of as “white-savior” attitudes. After all, we can’t ignore the shameful reasons why she, a white person, was ever in a position to independently create a historical record for a cultural group to which she did not belong. The 1950 LP “Songs of the Chippewa” (Ojibwe),1 which Densmore recorded and compiled herself, is a near perfect microcosm of this dualism between historical record and material harm. This compilation of recordings, taken on Ojibwe reservations between 1907-1910, was published with a bulletin, a document similar to liner notes which proved to be extremely revealing as to Densmore’s engagement with, and attitudes toward, those she recorded. 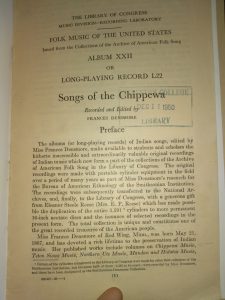 The first page of the “Songs of the Chippewa” bulletin1

In her favor: Densmore credits her performers in the notes, lays out relevant personal information about them, and presents freely given and accurate cultural information about their tribes. In this, her engagement has some authenticity (if such a thing exists). She includes performers’ Native names and the song lyrics recorded in tribal languages, which I find to be a particularly significant example of genuine cultural engagement. Here especially, there are traces of Native voices, of Native histories as Indigenous Peoples wanted them preserved, in her work, and she showed genuine respect for them in how earnestly she preserved them.

However, her writing also reveals concerning white-saviorist attitudes toward the Indigenous people she worked with. While she may have had shining moments of respect for her performers and their cultures, Densmore often failed to consider how Native Americans wanted their music to be represented; she used writing to codify aural traditions, and she dissected music with western analytical methods instead of using the language and analytical tools that the musickers themselves used to engage with their own traditions. She engaged with Native musics on her own terms, not as the peer of those she was working with. This implies an attitude of superiority, the white-savior attitude which discards the possibility that culture-bearers have any knowledge to offer as to how intercultural engagement should take place. Densmore’s white-saviorism also took more explicit forms: she wrote that she undertook her recording projects to preserve in White institutions that which was “disappearing”2 while ignoring the fact that, as a white woman, her interests were the reason why those musics were being intentionally destroyed in the cultural genocide of the late 19th and early 20th centuries.

The juxtaposition between Densmore’s perspective and Indigenous perspectives preserved in her work complicates established profiles of this early musicologist. She’s often reduced to either the intrepid founding mother of ethnomusicology or the misguided white savior who took advantage of Native tribes all over the country; in a way, she was both. There are Native voices that shine through her texts, and to discard her writing or her recordings is to discard those valuable perspectives and pieces of cultural history. However, everything Densmore wrote has to be read with a most critical eye, because those white savior attitudes permeate every inch of her activities. She was an extremely flawed human being who preserved some genuine aspects of cultural and Native voice (almost despite her own best efforts).

Embracing the paradox of her work, however, does not answer the question of how or whether modern musicologists should use it. Densmore’s materials teach us a lot about white constructions of identity in opposition to an Indigenous “other,” so they’re useful on a meta-musicological level, but should they be considered good source material for modern study of Indigenous traditions? I honestly think the answer is generally no. We can and we must address Densmore’s legacy, but I believe that when it comes to cultural research we should prioritize the voices of Native scholars, and focus on Indigenous cultures that willingly produce musical content to share with the broader world, or otherwise want to participate in musicological research – many, unsurprisingly, don’t. Perhaps the broader musicological community, particularly the American musicological community, should take a step back from trying to study Indigenous musics and focus on pursuing material, reparative action with Indigenous groups. When Indigenous peoples and Indigenous scholars are uplifted, there may be room for us collectively to overcome legacies like Densmore’s and more ethically engage in musicological study of vibrant, living traditions.