When people think of jazz, places like New Orleans, Chicago, and New York City come to mind — not a small city of 25,000 in Rhode Island.

The Newport Jazz Festival, with its inception in 1954 has been credited as a crucial component in the development of jazz culture in the Chicago Defender, by none other than Langston Hughes. 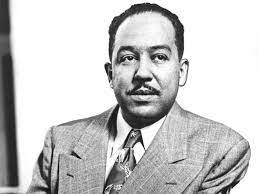 A participant of a sort of jazz himself, being the creator of “jazz poetry” (for an example, see this link!), Hughes’ take on the Newport Jazz Festival impact on jazz is compelling. In his June 1963 article, “Jazz and Newport Festival”, Hughes comments on the festival’s role and ability in cultivating a culture of large group fun while listening to jazz. 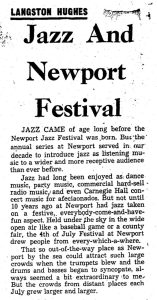 In its history, Hughes mentions jazz’s place in dance music, party music, commercial music, and even formal concert music spaces, yet likens the environment at Newport Jazz Festival to that of a baseball game or county fair.

Created by George Wein and financed by Louis and Elaine Lorillard as a non-profit educational institution intended for funding musical scholarships, the festival’s focus on jazz was a turning point in the consideration of jazz as music by white Americans. Wein and the Lorillards being white Americans themselves, Hughes credits them for “giving jazz its golden crown”, suggesting they be crowned themselves. 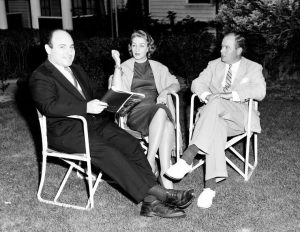 Though we have not discussed jazz on its own much in this class, I find the notion of crowning white Americans who “were the bigger people” by simply accepting jazz as a legitimate genre of music a familiarly white savioristic theme when it comes to music that can be accredited to Black people and musicians.

The festival did, however, also make waves in the desegregation of the area around the time of its occurrence. The festivals founders set out for the event to be wholly “democratic and interracial”, this theme extending to the integration of all Newport hotels, restaurants, and other public accommodations.

Not only did the Newport Jazz Festival have an effect on the physical environment of the jazz taking place, but it also influenced and provoked conversations about the futures of jazz. Considering the array of fame and experience among its performers, Newport Jazz Festival did its part in introducing new, modern jazz through its many young performers while solidifying old jazz’s influence through jazz greats like Louis Armstrong, Benny Goodman, and John Lee Hooker.

I was surprised to learn about such a crucial influence of jazz culture in a place as unexpected as Newport, Rhode Island. I think that this instance once again proves the importance of the type of research and mapping we have been doing on “American” music history in this class — perhaps the history explored in this post could inspire a whole new mapping project! 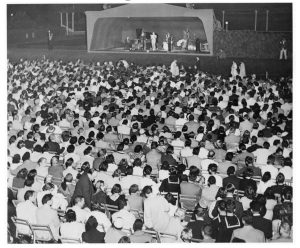 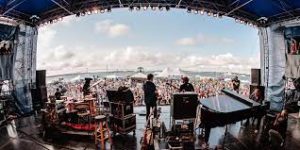