American composer, Aaron Copland, is one of the most well known composers of the 20th century and one of the largest influencers of “American Music” … whatever that means. I still don’t know.

The Piano Concerto is one of Copland’s compositions with heavy jazz influences. It was first performed in Boston on January 28, 1927. While it is regarded a success today, upon its premiere it did not receive that recognition. After reading letters from listeners following the premier of the Piano Concerto, Copland wrote to Russian composer, Nicolas Slonimsky, on his reaction to the general public’s distaste of the composition.

“How flattering it was to read that the ‘Listener’ can understand Strauss, Debussy, Stravinsky – but not poor me. How instructive to learn that there is ‘no rhythm in this so-called concerto.’” 1 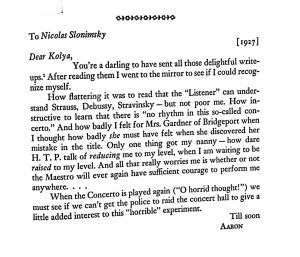 In this concerto,  “Copland himself explicitly states that he intended in this piece to explore the possible applications and extensions of jazz rhythm to modern art music”2. But why was the public so adamant against this piece? Perhaps it was the placement of jazz in the concert hall.

“The challenge was to do these complex vertical and horizontal experiments and still retain a transparent and lucid texture and a feeling of spontaneity and natural flow. If I felt I had gone to the extreme of where jazz could take me, the audiences and critics in Boston all thought I had gone too far.”3

Copland had many influences on his music, including Ravel, Rouseel, Satie, Milhaud, and Stravinsky. Copland’s main influence that I want to explore is jazz. Milhaud and Les Six are often credited with influencing Copland’s “jazzier” works. Something to explore in greater depth is the implications of limiting Copland’s influencers, especially when it comes to jazz, to white men and why the audience in Boston reacted the way they did when they heard jazz infiltrate their concert halls.