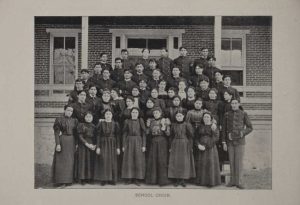 Boarding schools were a tactic used by the American Government to assimilate Native American children from the 17th through the 20th century. Boarding schools isolated indigenous children from their families and communities and stripped them of their cultures by cutting their hair, requiring uniforms, ignoring students given names and forbidding use of their native languages. One large influence on the assimilation of native children that is often not discussed is the music taught and performed at these schools.

In 1879, Carlisle Indian Industrial School was the first government run boarding school for Native Americans to open. Carlisle was known nationally for their extracurriculars such as their band and football team. Like the academic classroom settings, these extracurriculars were centered around promoting American ideals1. For example, students put on a performance of, “The Captain of Plymouth,” an opera that celebrates the white settlers’ arrival to America. 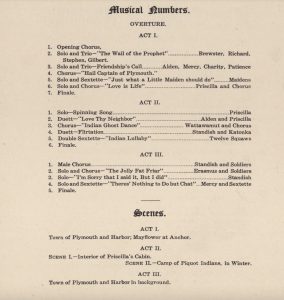 Students played and celebrated their white colonizers in this play and had to perform songs such as, “Hail Captain of Plymouth” and “Indian Lullaby”.

Students at Carlisle were required to take music classes and were taught exclusively Western Classical music. Music was used to enhance the Christian teachings forced on the students as the orchestra and band played for evening Sunday services. Even in the course description of their music offerings, Carlisle makes it clear that there is only one way to make music. The white way.

“There is, too, a vocal department, which includes the class work and singing exercises, where all are taught the rudiments of music”

The phrasing, “the rudiments of music” implies that there is only one way to make music, and the way students made music at home was incorrect. Furthering the assimilation practices, the course catalogue encourages western music to be made at “student social gatherings.”

Indigenous people are still impacted from the trauma these boarding schools and white colonizers inflicted upon them. Better understanding the harmful effects western classical music had on Native Americans can steer us in the right direction towards healing.

1Winston, Abigail C. (2019) “The Role of Music in Assimilation of Students at the Carlisle Indian Industrial School,” The Gettysburg Historical Journal: Vol. 18 , Article 9