Before this course, I had not thought in depth about how something usually perceived as “neutral” by the viewer (i.e. maps) can actually contain many clues as to the motivations and thoughts of the creator. I always saw maps as an unbiased source of information, which of course, I have come to learn is completely false. With this new found enlightenment, I decided to take a look a a map I found in the American Indian Histories and Cultures database. This map is titled “A map of the British and French settlements in North America”. It is dated to be created between the years 1745 and 1749. I could not find a single cartographer or artist name, but we can assume the creator came from a British perspective because the language of the map is English. 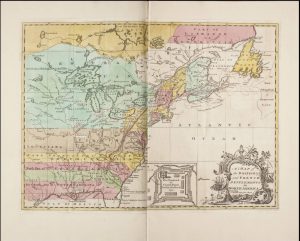 The first thing I noticed is that this map is extremely chaotic. Certainly not up to Maeve’s standards. The colors do not correspond to any particular legend or key and too many things are labeled so that the viewer doesn’t know what to focus on.

So besides the fact that this is just a poorly designed map, what does this tell us about the perspectives of colonialists?

The first thing that I noticed is the way the territories are color coded in completely straight lines or rarely with landmarks such as lakes or rivers. This reveals a couple of things. Firstly, this gives us insight to the way in which colonialists either negotiated with each other to create such clear and arbitrary boundaries or that the British (creating this map) are simplifying the ever changing territories with these completely perfect barriers. Nonetheless, we can recognize that these boundaries are indications that the colonialists had very little regard to the Native Americans that were living on these lands in the context of dividing up land.

Speaking of Native Americans, we can also notice from this map that although the land division among the colonialists does not regard them at all, their presence was almost certainly known among colonialists, as the rivers are labeled after them. For example, we can see, a “Chickasaw” river and a “Cherokee” river. There is even an area labeled “Chactaws” where I assume that the Choctaw people inhabited.

This dissonance between the recognition of Native American presences in labeled landmarks and the absence of them in territory borders gives us lots to grapple with. For one, we have to realize that Native Americans were obviously a notable part of life for colonialists in the 16th century. The map shows us this. However, the map also shows us how the lack of inclusion of them in drawing boundaries, at least in the perspective of the British, illustrates how colonialists saw Native Americans as “uncivilized” or “savages” not worthy of owning land.