This week, we continued our discussion on minstrelsy, so I looked up some primary sources by searching up minstrel shows and performances. There was one source that was quite interesting and concerning at the same time. It is a book of songs and jokes performed at minstrel shows with a frankly horrible sense of humor, and I want to present to you a few pages in this book.

This source is a book titled Joe Davis Entertainment and Minstrel Folio, and it was published in 1931 in New York, and was compiled by Joe Davis. This book also included works by some other musicians and composers, which are all credited on both the cover page and individual scores. Honestly, it was hard to determine who this source is for, but Joe Davis himself seems very proud of this work. In his foreword he said, “Never before has such a wealth of material suitable for Radio, Home entertainment, professional or amateur show been assembled in a single folio.” I can’t imagine playing minstrel songs with racist undertones and bad jokes that are mostly unfunny and unbearable… Yeah I roasted him. I tried to do a deepdive on Davis, but when I typed his name into google, this same book showed up and it is quite easily accessible still, and it is sold on amazon for the sweet price of 26 dollars. It is quite concerning to me that this part of the history is not dead, but pretty much still alive.

There are two specific things in this book I want to talk about. First, there are a lot of short early stages dad jokes (which I may or may not be stealing), but there are also some pretty racist jokes. On page 14, which is a section of jokes titled “Da*ky-ology,” and the one at the bottom of the page does not involve any slurs but makes jokes at black people’s death. It goes like: 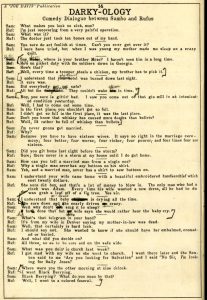 Sam: Where were you the other morning at nine o’clock.

Sam: Black Berrying? What do you mean by that?

Ruf: Well, I went to a colored funeral.

So… I don’t see how this is funny, and it was quite uncomfortable when I first read it.

Another page I want to talk about is page 51, which is a music score of a song titled Dixie Jamboree. Similar to the joke, this song takes black experience and makes entertainment and mockery out of it. The lyrics suggests the theme of  slavery and plantation life, hence “Way down South there in the land of cotton.” A theme I have noticed in minstrelsy (and white scholars’ study of African American music) is that they try to skew the realities of slavery and try to make it seem like the enslaved black people were enjoying their lives, when in reality they are far from that. One of the arguments they 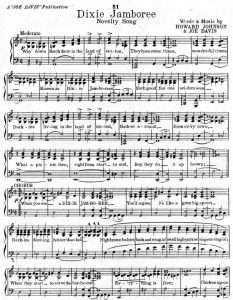 would use is that enslaved people would not be singing if they were not having a good time, but we have discussed that although sometimes music was used in celebratory scenes, a lot of times it was a way of mourning and praying. The lyrics delivered the same ideology, such as, “They have some times, wonderful times, known as Dixie Jamborees, Such good fun one seldom sees.”

This source connects with course material quite closely, and I really hope what happened a century ago will not happen again today, where white people and society as a whole finds interest in black art, but separates it from black emotions, faiths and experiences. I know it is still happening today. We NEED to be better.