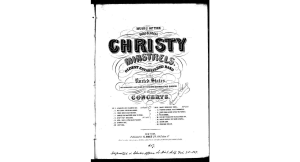 Oh Susanna is a song I personally remember singing in my childhood, during daycare, summer camps, and elementary school. So, when I learned in class that Oh Susanna is a song written for minstrel shows in the mid 1800s and has extremely racist origins I wanted to do a deeper dive on the history of minstrel songs that are still sung today, and learn more about why said songs have had such an effect on our culture.

The first thing that I learned when researching was that Oh Susanna was one of the first popular ‘American’ songs to be published- there were over 100,000 copies sold, where before no song had sold more than 5,000. Many articles I read stated that minstrel songs had been considered in the early 1800s to be America’s purest or singular musical contribution to the world. This is obviously not true. But, the fact that minstrel troupes and songs were published internationally and minstrel shows were extremely popular forms of entertainment led to this genre of music having a great impact on American culture. An article written by Dr. Katya Ermolaeva on the history and impact of songs such as Oh Susanna and Camptown Races states, “Minstrelsy left an indelible mark on the American music and entertainment industries”. The first ever film with sound in America, The Jazz Singer (1927), was a story of a singer who wanted to work in a minstrel troupe.

Why are these songs are still taught and sung by people often, and why were they so popular? The answer to that question is complex, but I would like to focus on a singular issue- the whitewashing of their lyrics. Oh Susanna’s original lyrics include racist slurs and is written in a stereotyped black dialect common in minstrel shows of the mid 1800s. Ermolaeva explains how, throughout the decades of the 20th century, due to the civil rights movement and growing social justice movements, minstrelsy and blackface became more and more unacceptable in society. But, instead of being removed entirely from songbooks and soundtracks, minstrel songs and stereotypes merely became more and more subtle. Ermolaeva discusses such a change in the context of the minstrel song also still popular today: I’ve Been Working on the Railroad. “ The mythologizing of “I’ve Been Working on the Railroad” as a tune celebrating American values has continued into recent decades. When Smithsonian Folkways reissued Seeger’s recording in 1990, the liner notes touted the “democratic passion” of folk revivalists to include the “music of working-class Americans” as part of the “national cultural conversation.” The Black Americans represented in “Railroad,” however, barely had any rights as laborers in railroad camps and arguably still lack basic rights as Americans today.”

The fact that minstrel songs are still sung and accepted as unproblematic additions to the  ‘American music canon’ is incredibly distressing. I would like to finish this blog post with Ermolaeva’s words, which I think speaks to our responsibility to work towards never letting these songs with their racist pasts exist unchallenged. Ermolaeva states, “Removing minstrel songs from children’s music programs will not undo the damage already done by blackface minstrelsy. Their removal, however, would serve as an acknowledgment of the damage wrought by these songs and a pledge to no longer promote that legacy. Our children won’t know the difference now, but one day they will be grateful for our efforts to rid their classrooms — and their childhoods — of racist songs…”