Yeah…CW: Racist language that are quite uncomfortable

For today’s blog post, I want to talk about two primary sources that I find interesting. This week, we talked about the origin of African American folk music, and I was thinking to myself, where exactly did the music go? Some of them, as we already know, were adapted by minstrel shows. I came across a short article in a hundred-year-old newspaper, which talks about minstrelsy in an interesting way. Based on that, I went in and looked for other sources related to minstrelsy and found some parallels and differences between the two.

Here is the first article.

This article stood out to me because it seems to be critical of minstrelsy in the first half, but then it quickly shifts to glamourising this “new” form of minstrel shows, which I think is such an interestingly complicated idea. This article was published on April 12, 1902, in the newspaper Portland New Age. The author of this article is unknown so I can’t do that much of a deep dive on them. For the first half of this article, the author states that the death of past minstrel actors signifies the death of the old minstrel shows. At this point, I thought this article is serving some fresh, woke ideas.

Then, it shifted into sort of an advertisement for this new age minstrel show, and the author said that the old minstrel shows “represent no class and their programs are a hotch potch of absurdly sentimental drivel and eccentric vaudeville specialties.” The author introduces the new minstrel shows by stating the type of dance, music and instruments that will be there, “The dances were… The instruments were the banjo, the fiddle, the bones and the tambourine. The songs were the racy plantation melodies, the jubilee, hymns, … ” all of these were elements of African American folksongs.

This is not even the worst part (since they were just being mean to their predecessors), the author went on and said that the old minstrel shows “was to represent the plantation negro in h 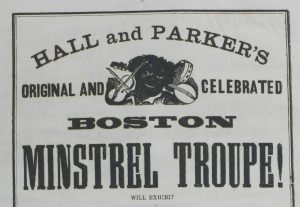 is native humor and with all his racial peculiarities.” This answers the question I posed earlier: where did the African American folksongs go? The person writing this article as well as those who performed in the shows are the ones answering my question without speaking a word– obviously they appropriated it. It is just nuts to me how they think his new and improved version of minstrelsy is good and worth advertising. But oh wait, it probably has a market.

This is a poster for a show.

This other source is simply a poster of an “old” school minstrel show, since it was posted in 1860, and it shows some names of minstrel actors, programs, as well as the price for entering the theater. On the top of the poster, it shows a bust drawing of an African American person juggling a banjo, a fiddle and a tambourine, which happens to be the instruments mentioned in the article. The poster also referred to the minstrel actors as the “great stars,” which rubs me the wrong way. The two sources combined tell a story, a story of appropriation, a story of tears and cries viewed as mockery, and a story of the bloody past in the camouflage of music.