Our last few class sessions have asked us to consider how history presents Black music and culture and the ways that we can critically evaluate those presentations. Our syllabus assigned us a series of readings about Black music, which were all categorized under the subheading “The White Hypothesis.” The authors of these articles, Henry Krehbiel (1854-1923) and George Pullen Jackson (1874-1953), each highlight a relatively convoluted set of principles that they saw to be universal truths about the origins of Black music and spirituals. Though Krehbiel and Pullen Jackson’s arguments are different, and even contradict each other on many points, they’re both rooted in inaccurate assumptions about Black culture, identity, and music.

The primary source that I want to focus on today is a political cartoon from the Library of Congress’ Prints & Photographs Online Catalog. “The Political Quadrille. Music by Dred Scott” (1860) paints an interesting picture of the political response to the Dred Scott decision [1]. 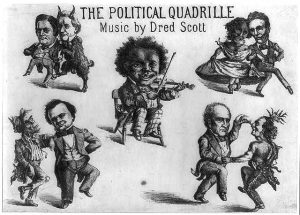 The characters in this cartoon represent the four candidates for the 1860 presidential election, each of whom provided commentary on the future of race relations in the United States during their campaign. The cartoon’s central figure is a caricature of Dred Scott playing the fiddle. In the upper right corner, the cartoonist depicts Abraham Lincoln dancing with a Black woman — potentially a reference to his party’s association with abolitionists. It seems as though the illustrator positions Dred Scott as the orchestrator of the racialized discussions that were the center of the 1860 election.

This cartoon has the broader purpose of serving some large political end in the midst of a presidential election, but it also presents an interesting characterization of music making in the mid-nineteenth century:

The quadrille was one of the most popular dance forms of the nineteenth century. It is performed by four couples and was danced in a square formation, originally intended for performance by members of the aristocracy.

The illustrator implies that each of the presidential candidates are participating in a dance of the aristocracy, or a dance that carries with it some kind of social power. There is an interesting contrast between the assumed social power that the quadrille carries and the people who are performing it. While Lincoln or other presidential candidates are performing, their partners are assumed to be those who were not within the higher ranks of American society at the time. Using music as a political tool, whether that be through a song or a visual representation such as this cartoon, endows music or the performing arts more broadly with some kind of authority. Even presented under false interpretations of, in this case, Black culture and identity, music and dance are used by this illustrator to underscore a broader, relevant social conversation.

Cartoons and art like this are particularly useful to understanding how others understood music’s position in society. They reveal perceptions of a group, individual, or activity through the eyes of the people that were living at that time. Although these types of illustrations can and often do contain gross misrepresentations of certain individuals and groups, they still point out a important perspectives that influence our history in many ways.