The beginning of the 20th century brought about a slew of cultural and political revolutions in Mexico, more specifically 1910-1920. Fleeing the political turmoil, typically as a result of stolen land from wealthy capital owners, hundreds of thousands, left from the one tenth of the population’s live lost, of immigrants migrated to the US. With blooming inductres in the sector of mining, agriculture and ranching, the hundreds of thousands of hungry Mexican immigrants answered the call, and were met with radicalized violence and discrimination, as was probably customary at the time. It was in this time of integration that the Mexican tradition of Corrida was born, or folk songs that were sung between migrant workers to bring them together.

Understanding the Corrido tradition requires close examination of the political turmoil happening at the time. Pofrio Diaz ruled Mexico from 1876-1911. Under his administration, the goals of the government lied towards bringing in investments from outside the country and revitalizing the country’s infrastructure. However altruistic, these goals were met from direct exploitation of the peasant working class, and many were forced from their land. Work conditions were incredibly terrible. 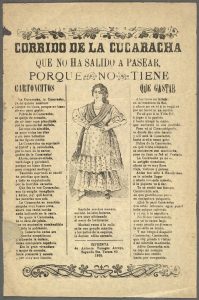 Corrido de la Cucaracha broadside by artist José Guadalupe Posada showing a full-length figure of a simply dressed woman with a shawl around her shoulders and hands on her hips, 1915. The song conveys the story of la cucaracha, which literally means “cockroach,” but during the Mexican Revolution this term was synonymous with “camp follower” and referred to women who would follow and live with their male partners in the war camps.’

These songs were sung by the Mexican immigrants working in America’s booming industries. Due to the nature of this musical practice’s tradition, many of the contents of it citation do not exist, though the primary source I’ve chosen to analyze is, in fact, written down.

Music born from political roots, and born form the direct experience of assimilating into another culture, is something we’ve touched on in this class and classes previous. Not necessarily born in Mexico, thought deeply rooted in existing Mexican musical tradition, Corrido is an interesting mix of assimilationist hardship and musical creation. I found this practice particularly interesting as it relates to our conversations about American music being a shared experience, not necessarily born from one group with one distinct sound.