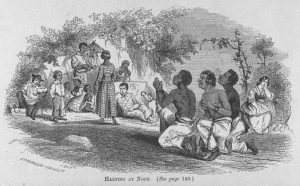 As I was doing my class reading in Eileen Southern’s book “The Music of Black Americans” something she mentioned caused me to pause, mainly, the way that she describes the relationship between white and black settlers. She makes multiple mentions of the almost nurturing nature of certain relationships between slave and master, as she mentions:

“Throughout the region, slavery a assumed a milder form than in the southern colonies, although in some places the harsh and severe treatment of black slaves provoked more than one rebellious uprising. Generally, slavery tended to be paternalistic, slaves being regarded as part of the family” (Southern 35).

She also mentioned the encouragement by members of the clergy to convert black Americans to Christianity (Southern 36). These views completely shook up my view of slavery and how it occurred in the Americas. In school, we were fed the narrative that slave masters and owners, treated all slaves as subhuman. Slave owners whipped their slaves, beat them, and treated them as livestock. Although these things were common, Southern for the first time made it seem as if this were not always the case.

To be clear, I am not looking to diminish the horrors of slavery. Even “milder forms” of slavery (as Southern puts) are disgustingly immoral. However, Southern challenged my assumptions and brought me to ask the question: Was the degree of severity and inhumane treatment of slaves something that was dependent upon region? Was it dependent upon religion? How did the ideologies of the time shape the treatment of American slaves? And what were some of the different ideologies surrounding the treatment of slaves around at the time? These are some the questions that I grappled with after reading through Southern’s book.

Which brings me to the primary source that I want to highlight today.

I decided to explore some letters written in 1835 and 1836 by clergy member brother Jacob Zorn. The letters are addressed to someone known as “Brother” referring to another member of the clergy. Zorn seems to imply that the state of life for American slaves seemed to be improving by means of the Church. He quotes:

“When we call to mind the very different state of things thirty years ago, we bless the Lord for the special interest taken in these poor outcasts by the Christian of our day. By means of schools much good has been effected, perhaps as much indirectly to the parents as directly to the children. A few years ago the idea of schools for Negro children was ridiculed; now instruction is gradually spreading and many have already learned to read those precious pages on which are inscribed the truths of salvation”.

He also seems to imply that his church is particularly invested in including slaves in their congregation. Jacob Zorn makes this enthusiasm clear stating:

“Not a word, I am confident, need to be added to press the value of early religious education upon the friends of the negro race; they will not leave their work half done, by suffering the children to grow up in ignorance”.

Although Zorn makes it seem as if the church is bettering their treatment of slaves and encouraging their involvement in the church, this does not always seem to be the case. Southern argues that many slave owners were resistant to the baptism and conversion of their slaves to Christianity. And, to be clear, the conversion of Slaves to Christianity does not always reflect their treatment, as Christianity was also used to justify slavery.

By looking at these letters, it gives us a more accurate and nuanced look of the sentiments surrounding slavery and the treatment of slaves. Instead of generalizing that every white person treated slaves as subhuman, this letter gives us a small amount of insight into other ideologies surrounding this topic that were present in society around the time of slavery. The generalization of all white people as monsters during the era of slavery makes the current day population too quick to separate themselves from them. By making known a more nuanced version of the ideas surrounding slavery, we are reminded that we are just as likely to commit similar atrocities.