“Before the United States entered World War II, agricultural authorities warned the federal government that a labor shortage loomed due to American workers enlisting in the armed forces or taking jobs in the defense industry. To fill the shortage, the United States negotiated a guest-worker program with the Mexican government that led to the creation of the Bracero Program [1].” The Bracero Program allowed millions of Mexican men to come to the United States to work short-term on primarily agricultural labor contracts. From 1942 to 1964, 4.6 million contracts were signed, with many individuals returning several times on different contracts, making it the largest U.S. contract labor program. 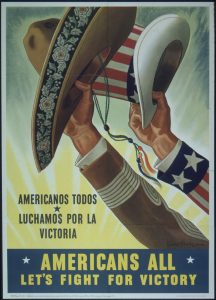 a poster from 1941 promoting the Bracero program

In my research, I found some very painful songs that arose from this era in American history. These songs were called “corridos,” or traditional Mexican folk songs. One of the corridos I found was entitled “Corrido de los desarraigados,” or “The Corrido of the Uprooted Ones [2].” 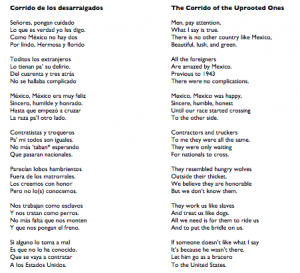 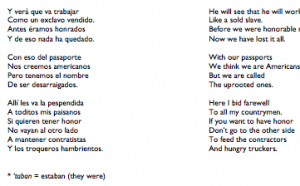 check out this link for a song that sounds similar to “The Corrido of the Uprooted Ones.”

I found it difficult to read the text of this song. Some of the lyrics are quite shocking:

“They work us like slaves
And treat us like dogs.
All we need is for them to ride us
And to put the bridle on us.

The men in the Bracero program were not treated well. “Guarantees for braceros were not kept. Many employers paid workers less than agreed. They also charged for workers’ food, housing, and tools. Some money was kept back in savings accounts, which were usually not given to braceros. Living conditions were often poor, and most braceros faced discrimination and hostility from local populations. Conditions resulted in some strikes by braceros, but force and threats of deportation to Mexico usually ended the stoppages [1].” 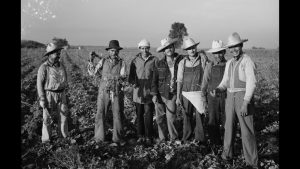 The men in the Bracero program found a way to express their suffering through music. I imagine that with all of the immigration conflicts America is currently undergoing, there is going to continue to be music that tells of the painful parts of the Latin American experience. My hope is that we as a nation will listen.