What better use of the Manitou Messenger than to look into the history of the St. Olaf Choir! Having just gone on tour with the choir this past summer, I wanted to look into previous “homecoming” tours such as the tour of 1930. This tour, in particular, piqued my interest as it occurred during the depression and spanned 3 months and several countries, not including the winter tour to the south. Here is what the touring schedule included: 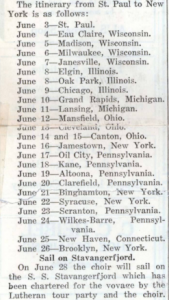 According to the SHAW-OLSON CENTER FOR COLLEGE HISTORY, the invitation to the celebration of the 900th anniversary of the Christianization of Norway was carefully considered and accepted [3]. This year, when preparing to leave for tour, it was emphasized that the return of the St. Olaf Choir was very much seen as a homecoming as I had stated and is further supported by Schmidt’s memoir [3].

My first question was primarily, how could students and their families afford a 3-month European tour during the Depression? One way was through selling sight-seeing tours for parties interested in touring with the choir which amounted to $6,500 then, approximates to $99,936 for adjusted inflation [2, 3]. Uff da! These additional funds were said to have alleviated some of the costs but any more details around financial issues were not mentioned [2]. More importantly, it was the celebration of Christianity being brought to Norway (as well as some good old fashioned sight-seeing!) that inspired donors and students alike.

There was also mention of a farewell party, “to bid bon voyage” which I found endearing. Events surrounding the choir were published throughout the school year such as, “Choir Presents Concert Tonight In Minneapolis” on April 29th, 1930 and “Choir Leaves Northfield on European Tour,” June 3, 1930. A number of similar articles were published throughout the announcement of the tour and throughout the year. What I am trying to get at is 1) the events of the choir were always in the paper and 2) not even the great depression can stop the St. Olaf Choir from touring. 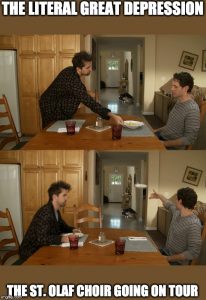