In a past blog post I explored a small evolution of the national anthem in written and notated forms, and this post I hope to extend a bridge from that topic towards my eventual final research topic of state songs. Finding common threads in state songs can be tricky, as distinct similarities between all of these tunes is rare. However, I believe looking at states with the older official state songs- and songs written at a similar time with a similar subject or tone- can provide important clues as to what sort of formula, template, or resemblance these pieces had with one another. 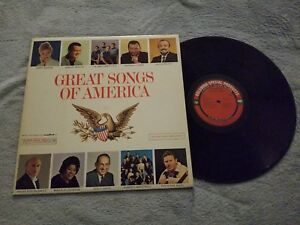 It was on Columbia Records “Great Songs of America”, compiled in 1961, that I found a recording of the song “The Yellow Rose of Texas”. While this is not the official state song of Texas (that honor goes to “Texas, Our Texas”), the piece offers an example of how a particular location is essentialized and remembered in American song. The song conjures ideas of a military march, complete with constant snare drums and occasional piccolo interludes between verses. The male chorus sings lively tune in tight harmony, with moments that sound almost like barbershop. The peppy tune uses vivid imagery of the Texas landscape, although there are varied versions to the lyrics when searching online.

“The Yellow Rose of Texas” was known before the American Civil War, but became quite popular among the soldiers of the Confederate Army, especially those from the state. The song shared among these men fighting together created a camaraderie within the piece, a connotation that goes beyond simple performance practice. In addition, the piece has been situated in its own mythology of sorts, with a popular legend that a young woman by the name of Emily West aided in helping the Texans win a decisive battle in the war for independence from Mexico.1 Scholarship has noted the inaccuracies in these mythologies2, but the fact of the matter is that the piece still gained notoriety for representing a land that many young soldiers longed for and remembered as home.