One particular quote from Tuesday’s reading by Samuel Floyd grabbed my attention; Floyd reveals that “William Grant Still maintained that his purpose was “to elevate Negro musical idioms to a position of dignity and effectiveness in the field of symphonic and operatic music”.1 The fact that Still seems to imply that the current state of black “musical idioms” was lacking something puzzled me. My impression had been that Still was one of the composers who most explicitly worked toward making black voices and sounds heard. Indeed, Rae Brown says that Still “was consciously writing in the Negro idiom”, and Still himself says works such as “Darker America” are meant to “represent the American Negro.”2, 3 That Still seemed to believe that black music was in need of “elevation” at first seems at odds with these other sentiments. 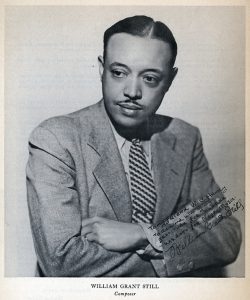 Digging deeper into Still’s personal correspondences with his long-distance friend and colleague, Irving Schwerke, I found myself engrossed in a web of attitudes and opinions that sometimes seem to build on each other and sometimes contradict one another. In one enclosure to Schwerke, Still analyzes his own “Afro-American Symphony” and seems to build upon his previous implication that black musical idioms were at a lower level than classical music. He says that his symphony “portrays that class of American Negroes who still cling to the old standards and traditions…These are an humble people. Their wants are few and are generally child-like. Theirs are lives of utter simplicity.”4  Still’s blatant comparison between this “class of American Negroes” and children actually shocked me. How do we make sense of one of the most prominent and accomplished African-American composers of the 20th century seeming to buy into many of the stereotypes of black music that we condemn?

Another of Still’s earlier letters to Schwerke perhaps reveals some of the psychology behind his remarks. A distraught Still writes “It is unfortunate for a man of color who is ambitious to live in America…I have never felt this so keenly as in the past few months. Friends who would lend me a helping hand, who would make it possible for me to make a living for my family, are unable to do anything because of those who are opposed to placing a colored man in any position of prominence.”5 This letter reveals some of the strain under which Still struggled during his career. It also made me think twice about my own criticisms of Still’s words. While we certainly should analyze a composer’s opinions, I think it is also important to not let a composer’s identity alter our expectations for these opinions. Perhaps we should criticize Still’s implication that some black melodies are in need of improvement, but we should also acknowledge that he was a composer struggling to make a living; it is entirely possible he was pressured to either conform to society’s stereotypes of black music or espouse them himself. Furthermore, it is natural for any composer to believe their genre of music is superior. It is a slippery slope to write off Still’s statements as pure pride or societal pressure, but I think it is an equally slippery slope to ignore these factors.

All in all, I have no clear answers or even arguments regarding Still’s words, and that is precisely my point. Like all of the issues we discuss, the opinions and words of a composer such as Still are complex and multi-faceted, and we must always strive to avoid oversimplification.