The iconic West Side Story is one of my favorite pieces of art, just ask any of the people who surround me about my numerous excited rants about the show or my incessant humming of its melodies under my breath at all times. When looking at the creation story of the musical and artistic landmark, what sticks out to me is the massive team that was utilized in its birth. The history of Broadway and the American Musical Theater is littered with creative duos that write and compose blockbuster hits. Whether you think of Rodgers and Hammerstein churning out what would become the Golden Age of the art form, or more modern examples like Pasek and Paul, Lynn Ahrens and Stephen Flaherty, or Alan Menken and Howard Ashman. One conclusion is clear: Power couples have long ruled the scripted stage.

What was unique about West Side Story was the size of its creative team- a team in which each member contributed greatly. The production assembled names that are now known as musical theater heavyweights and masters of their craft. Compositions by Leonard Bernstein, a book by Arthur Laurents, choreography by Jerome Robbins, and lyrics by Stephen Sondheim combined in the groundbreaking piece to tell a story that continues to resonate with audiences today.

In a letter to Bernstein, a young Stephen Sondheim oozes gratitude and affection for his colleague. Throughout his writing, Sondheim emphasizes the friendship the experience has engendered, specifically referencing not only Bernstein but Laurents and Robbins as well. It should be noted that although Sondheim was very early on in his career, this letter doesn’t communicate a feeling of hierarchy. Instead of using words like “mentor” or “leader”, Sondheim opts for a connotation of “collaborating”. 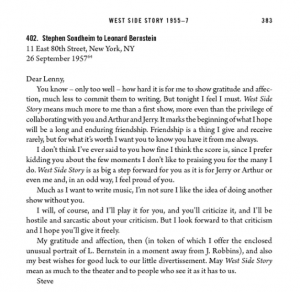 Exploring this unique friendship and team dynamic has led some scholars to draw conclusions about the factors that led bonds among these men to be so strong. Scholar David LaFontaine asserts that all members of the creative team “were all in various stages of coming to terms with their homosexuality in the oppressive atmosphere of 1950s America.”1 Further scholarly speculation points to the themes of troubled love in the song “Somewhere” from the musical as an anthem from four men who were personally and romantically troubled in a world that didn’t allow them the expression they yearned for.2 Back in the letter to Bernstein, Sondheim’s use of the word “us” when talking about the four men working together gives us hints to the bond that solidified among the creators of the innovative story. It is important that we remember the creation of such a powerhouse group in this art form was not only due to artistic merit, but also a shared identity.

“May West Side Story mean as much to the theater and to people who see it as it has to us.”

-Stephen Sondheim in a letter to Leonard Bernstein, 26 September 1957