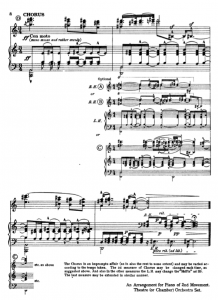 This is a 1945 recording of Charles Ives’ “In the Inn”. The performer in question is John Kirkpatrick[1], a pianist who championed of Ives and other composers of his scope, for instance Carl Ruggles. This is evident in his lengthy, if not a bit irregular correspondence with Ives’, from the late 1930s and throughout the 1940s until Ives death in 1954. Kirkpatrick’s approach to the works of Ives and Ruggles is nothing if not thorough; always asking for clarification of his interpretations, and expressing a profound respect for the harmonic intent of Ives.

Th correspondence shows that Kirkpatrick quite continuously throughout these decades was helping Ives develop pieces and initiating projects regarding his works, including this recording of “In the inn”. The piece’s original draft was dated around 1915 and composed about a decade earlier. As the second movement of Ives’ A Set of Pieces for Theater or Chamber Orchestra it shares the overall ragtime feel of the collection. The repurposing of the something with such close ties to Afro American culture, albeit in a new harmonic context, may indicate that Ives’ idea of creating a “new music” does in fact not completely sever ties with the American past.

In one of what Owens calls Kirkpatrick’s “semiregular progress-report letters”[2] he finishes his letter with contextualising the works of first Ruggles (“good old Carl”) and comparatively:

“Take good old Carl, for instance,— the splendid freedom of his musical inspiration, and the almost pedantic preoccupation with his non-repetition-of-note principle — the startling “modern” quality of his dissonant harmony, and the unmistakably “romantic” Wagner-Strauss derivation of his melodic contour. And of course, nobody has ever combined in their music more diverse elements than Ives!”[3]

It is evident that drawing inspiration from a wide variety of musical influences, both aesthetically and with regards to musical traditions, from different time periods and cultures is something Kirkpatrick holds in high regard. Is the synthesizing of inspirational sources an attempt of constructing a music that transcends race, identity and nationality? One could argue that if one merges enough elements one dilutes the source material to the point of transcendence.