In the last Virgil Thomson reading, I was rather intrigued by a particular quote of his towards the end when he closed the chapter of “American Musical Traits” with some musings about America’s role in the opera genre:

“What Americans are wrestling with chiefly (and the British too) is opera- trying to make our language serviceable for serious dramatico-musical expression.  I cannot predict the success or failure of this enterprise.  I merely point out that American music, having become by now a musical speech notably different from European, is testing its maturity on the problem that has ever been the final test of a musical idiom, namely, can you put it on stage?” [1]

Being as this was written in the 1970s, I honestly was not sure if Thomson is trying to claim that American opera does not have its own identity or that American opera had not existed up until then.  Either way, it seemed interesting that he would bring up the importance of composers like Edward MacDowell or Charles Ives in their roles as composers that encapsulate the American classical tradition and disregard someone like, say, George Gershwin and his opera “Porgy and Bess.” 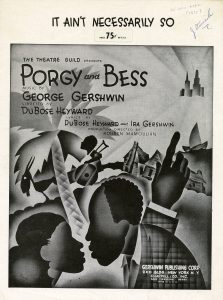 It seems odd that Thomson would disregard Gershwin’s contribution to the American opera genre (and I certainly argue “Porgy and Bess” to be a part of it, especially if the Met Opera is currently performing it).  Perhaps Thomson has a rather elitist perspective of American music in how it relates to European music rather than influences from African-American folk song traditions or African music.  He hardly acknowledges the role it plays in the landscape of American classical music for sure by only mentioning the use of blue notes or blues/jazz genres and their relation to Asian musics, which seems to be a strange point, but whatever floats his boat I guess.

The likely omission of African-American-inspired music by Virgil Thomson demonstrates the idea that the characteristics found in such music were not regularly accepted by music historians or musicologists as a part of American music and rather it became an other, which could be referred to as “black American music.”