As a class, we have encountered H. T. Burleigh many times already. As an African American composer, he adapted many pieces of Negro Spirituals into concert spirituals. Burleigh has been criticized for not presenting these songs in their original style but also praised for preserving them. In the Sheet Music Consortium, I found a H. T. Burleigh piece, “Tis me, o Lord; Standin’ in de need of Pray’r” with a preface saying, “Success in singing these Folk Songs is primarily dependent upon deep spiritual feeling. The voice is not nearly so important as the spirit;”. Burleigh takes part in the spiritual belief one must have when performing these songs. There are only a few other authors throughout this semester who argue this. One could say he’s trying to keep this works genuine because he goes on to warn against performing these songs by “treat them as ‘minstrel songs’”. Yet, he still relies on a spiritual aspect of performance. 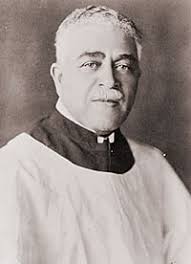 I found this text fascinating because I immediately thought of one of our dear friends Samuel A. Floyd Jr. and the notion of “cultural memory” he constantly brings up throughout the reading. He defines it as, “Cultural memory, obviously a subjective concept, seems to be connected with cultural forms-in the present case, music, where the ‘memory’ drives the music and the music drives the memory,” (Floyd 8). Both accounts suggest the almost metaphysical aspect to performing this music. They both stress the importance of the person’s spirit becoming involved in the music. 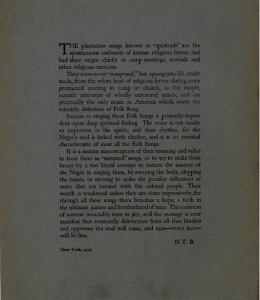 We’ve encountered these two accounts by black men telling us how spirituals must be performed. Both musicians have studied and lived with this music for their lives. As members of the black community with a long history with this music, do we take their notions of “cultural memory” and “spiritual feeling”. On top of all this, Burleigh wrote in classical European style, so how on earth does a white person approach this work keeping all these ideas in mind? 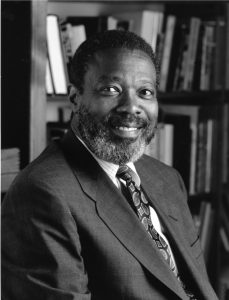 -Floyd, Samuel A. “Introduction.” The Power of Black Music: Interpreting Its History from Africa to the United States, Oxford University Press, 1997.