In my search on Sheet Music Consortium, I came across Gussie Davis (1853-1899), a composer from Ohio, who was a well known ballad writer. What I found particularly interesting about Davis is his involvement in northern minstrel shows. He wrote for minstrel shows, toured with minstrel groups, and even had his own minstrel troupe. What’s even more interesting? He was black. 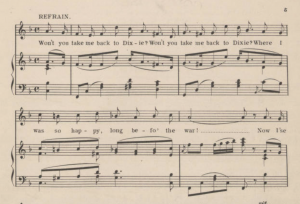 Won’t You Take Me Back to Dixie is a piece written by Davis from the perspective of a former (freed) slave. The lyrics use racial slurs, telling the story of a freed slave meeting their former master again and longing for plantation life, saying “and the old plantation, how I long to see dat home once mo’.” Taking this piece out of context and just examining it as a black person being nostalgic for slavery, the piece is very peculiar. However, it is likely that this piece was performed as a part of one of Davis’ minstrel shows. In this context, it makes sense that Davis would write as such, because black minstrel performers needed to commodify their “authentic blackness.” This provided a sense of comfort for audiences, who had never experienced the horrors of slavery, and allowed them to look past those atrocities.

“Black minstrels felt the added responsibility to counter the stereotypes of black identity…on stage that balanced racist stereotypes and political commentary.” – Was Davis doing this? It seems, judging based on this piece, that he was not. He did not do enough (if anything) to counter racist stereotypes. Instead, Davis just plays into these stereotypes, but understandably so, because his livelihood depended on it.