Country music is often seen as one of the most segregated, and “whitest” of music genres. In 2014, when hosting the Country Music Awards, country star Brad Paisley said, “If any of you tuned into ABC tonight expecting to see the new show Black-ish, yeah, this ain’t it. In the meantime, I hope you all are enjoying White-ish.”1 While it was intended to be a joke, many viewers took to Twitter addressing their concerns about the intentions and racism behind the joke. However, Paisley’s joke only highlights the truth behind the white dominated field of country music, with only a few black musicians.

Most notable for his success in country music despite his race is Charley Pride. Pride released his first single “Snakes crawl at Night” in January, 1966. The top executives of the label RCA agreed to sign him after listening to his demos before they knew his race. Fearing his success would be hindered from his race, the label producers shielded his race for the release of his first three singles by not putting his face on the album. Compared to Jackie Robinson, he endured any discrimination in silence, determined that his talent would earn his success. It showed because in his career he had 29 #1 Country Hits that no other black country singer has come close to matching.2

Currently on the rise in country music is Darius Rucker. Rucker has been the only black artist to top the Country chart since Charley Pride with his most known single, Wagon Wheel. In an interview, Rucker says he frequently has African-American fans approaching him at concerts or tweeting that don’t feel ashamed to like country music now if their friends give them a hard time. Rucker downplays his legacy as a pioneer saying “music is just music.” “People don’t want me singing country music. But I’ve never wanted to let anybody tell me what I can do.”3

When searching through the Sheet Music Consortium, it is nearly impossible to find songs about black cowboys, much less black country singers. I did however find a song published nearly a decade before Charley Pride was writing his songs. The song “My Dear Old Southern Home” touches on the same themes that country music embodies, such as home, and having a warm southern home away from the “harsh winters” Rucker sings about in the north in the song above. Based on the dialect in this song,4 it is through the lens of a black man returning to his southern home. Today, there is a universal dialect for country singers and it is not separated by race, but by being from the south. 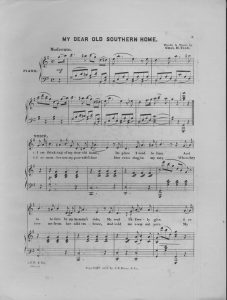 So, the next time someone cracks a joke about the predominately whiteness that dominates country music, they are not wrong. However, there are black musicians in the genre that have been very successful and also reach a diverse audience. It is the universal messages of country music, like homecoming that transcends time and race.