Robert Nathaniel Dett (1882-1943) was a Canadian-born poet, essayist, choir conductor and composer born in Drummondsville, a town founded by escaped slaves from the south of the United States. Being classically trained, he studied at both Oberlin Conservatory in Ohio and Harvard University, finally getting his Master of Music from Eastman School of Music in Rochester, New York. He was also the first African American that obtained an honorary doctorate from the Oberlin Conservatory.

His main body of work consists of “early English music, works from the Russian liturgy, Christmas carols, and arrangements of spirituals”[1], but he also wrote essays on “Negro Music”, warning about the dangers of commercializing it an consequently having it lose its meaning. Library of Congress’ biography on Dett refers to how his biographer Anne Key Simpson remarks his

“lifelong dedication to finding a musical form to bridge the gap between the music’s simple origins and its concert performance.”[2]

When listening to this performance as an example of his works I have selected his arrangement for solo voice and piano of “Follow Me”, categorized as a “Negro Spiritual” as collected by Mrs. Catherine Fields-Gay, about whom I found very little information. The piano accompainment provides a light harmonic texture in a style that in my opinion lends itself to the “Spiritual” genre. The  accompainment occationaly doubles or ecoes the rhythmic structure and/or the melody in the voice. This might be a slight nod to call-and-response. Examples of this are in meaures 16 , 20 and 24. He also also highlights the syncopation in the voice with a straight rhythm in the piano and vice versa, for instance in measures 19 and 27. 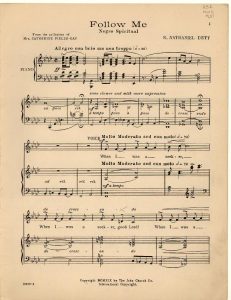 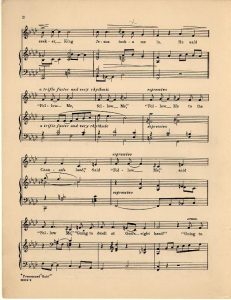 In this performance Hodges skips the appoggiatura assigned, possibly an interpretation of the portamento-like slide into the note, so often associated with the African American singing style as either transcribed by Dett or Fields-Gay. Hodge’s style of singing is essentially classical. The span between the “authentic” performance practice of spirituals and a traditional, euro-centric practice might seem too far, and Dett’s mission impossible.

Whenever an oppressive culture interprets the oppressed’s, there is always the asymmetrical power relation to consider, but what happens when an African American composer and performer respectively arranges and performs but within that “oppressive” stylistic framework? Is this reclaiming the material? Or is it as Dett wished to unify the two musical traditions in a “best of both worlds”-like scenario? Or is this just an aspect of the gentrification of the spiritual, seen throughout the 19th century?