Current music platforms such as Spotify certainly have their ups and downs, but rarely enough troubling side effects for most people to be deterred from utilizing their systems. One sweet serendipity of these platforms and their algorithms are the occasional chances in which they play something new and exciting that gets the listener interested and wanting to learn more. I found myself in a similar situation. After weeks of listening to stations devoted to Ella Fitzgerald, Billie Holiday, and Etta James, I was introduced to Hazel Scott.

When looking for more information about Scott, I came across countless advertisements and articles detailing various endeavors she made in a storied career. It is a shame I have not heard of her until now, and I ask the question: Why isn’t Hazel Scott consistently included with the names of influential African-American jazz artists like Ella Fitzgerald and Billie Holiday? How does a woman buried near Dizzy Gillespie and Louis Armstrong get a smaller narrative in a music she helped create and popularize?

The answer appears to lie in the latter parts of her career. From sources gathered, we can see that Hazel Scott was a groundbreaking and often controversial artist. 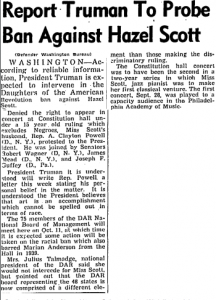 Not only did Hazel Scott push racial boundaries in a racist country (requiring many spaces to integrate their stages for her and her popularity despite historical precedence of white-only performers), but later in her career Hazel Scott was vocal against the Cold War and much of the harmful anti-Communist sentiment prevalent in the country. Scott was even called upon to testify before the House Un-American Activities Committee along with several other performers and artists who spoke out.1

I will always remember the very first piece I heard Hazel Scott play: her Two Part Invention in A Minor. The piece begins with the opening strains of Bach’s own Invention in A Minor, but she quickly takes off into a jazzed up version which was a typical style of Hazel Scott’s. Her performance practice is often referred to as “swinging the classics”.

Take a look at the opening melodic material of Bach’s invention (just the first 20 seconds or so are important).

Now listen to what Hazel Scott has done with Bach’s melody. At about 0:56, she finishes the invention and takes off. You can hear the addition of a drum set in the background as well.

Hazel Scott took classical music that many educated audiences were familiar with and gave it an American spin. By infusing jazz, a relatively young creation of the American musical mind, Hazel Scott excited and entertained audiences in a country yearning for a unified identity in a time of unrest and worldwide war. Unfortunately, her activism and commitment to her values cost her career opportunities, and has since affected her memory and legacy in American jazz and popular culture.

Want to learn more? You can enjoy this mini-documentary about Hazel! I strongly encourage you to learn more about this performer (some tidbits: she was the first black American to host a national television show and first to get leading roles in Hollywood films). Also, you can reach out to me and I will point you in the direction of countless Youtube videos, albums, and Spotify playlists!