For this week’s blog post I have chosen a spirited article, or what I personally categorize as more of an opinion piece, from the February 19, 1966 edition of The Chicago Defender. Encyclopædia Britannica describes The Chicago Defender as “the most influential African American newspaper during the early and mid-20th century”[1]. With a national target audience, it played a vital role in the migration of African Americans from the South to the northern states.

The article is written by Baptist preacher and professor emeritus at Virginia Union University, Gordon Blaine Hancock (1884–1970)[2]. The son of two African American former slaves from South Carolina, he was an avid spokesperson for the Afro American cause the generation before the Civil Rights Movement of the 1960s, often linking activism with education[3].

The article in question is candidly titled “Whites Constantly Steal from Negro”[4]. He begins with a call to arms of sorts:

He then goes on to describe how the religious practices of the south, what he calls the “Negro style” with “Negro Patterns”, have been adapted by white people. He continues with connecting preaching to music and music culture:

In the rest of the article he gives examples of genres and styles like tap-dancing, jazz, ragtime, and crooning. White culture popularizes the negro patterns. [They are] “Stealing our stuff!” he exclaims.  You can clearly sense Handcock’s frustration, especially when it comes to the financial gain that comes with the success of these genres, albeit a polished version to fit into white, bourgeoisie aesthetics and expectations. Despite the despair he seems to emit he ends on a somewhat positive note: 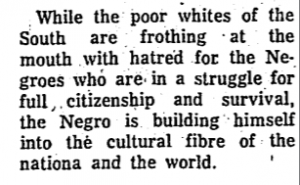 Hancock’s reaction is not completely incomparable to sentiments uttered in the ongoing debate about cultural appropriation, specifically when it comes music.

Although Hancock’s tone is very direct, in a political and academic climate such as that which Hancock had experienced up until 1966, we can understand why he resorts to a strong retaliation. Faced with inadequately researched, generalizing and populist scholarship and having to confront the likes of George Pullen Jackson, one can understand Hancock’s plea. His article expresses what I interpret as both despair and fear; The fear of losing one’s culture, one’s history, one’s music – an apprehensiveness very much shared with African Americans today, as well as other marginalized groups.