When German motion picture star Dorothy Welkes arrived in the US in April 1933, she was excited to hear the sonic landscape of America. Specifically, she longed to hear “Negro spirituals sung by American Negroes.” Upon the fulfillment of this wish, she remarked that she believed spirituals “represent the real American music.”

This brief clipping from the Chicago Defender is only three paragraphs long, but there’s a fair amount to process. The fact that spirituals were gaining international acclaim is significant, particularly since the discussion about its origins (and thus by implied extension, legitimacy) was long from over. Furthermore, that a German celebrity would prioritize black music at the brink of racist totalitarianism under Hitler’s regime is significant and could be examined as an act of defiance. Even designating it as the “real” American music is amazing; while now we take it for granted that gospel and spirituals are a valuable part of the American sonic scene, defenses of African American music making as a legitimate field continued for decades after with writers such as Amiri Baraka. 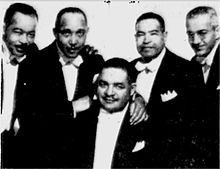 Of course, the idea that any type of American music can be more “real” or “authentic” than another is questionable. Welkes’ insistence on hearing “Negro spirituals sung by American Negroes” belies a level of exoticism and desire to view and examine black bodies in a commercial environment. In this sense then, the performers (in this case the musical group the “Southernaires,” not to be confused with the “Jackson Southernaires”) were forced to perform blackness for a white witness.  Although no black-face was used, her desire for “authenticity” is reminiscent of the “fear of and fascination with the black male” Eric Lott outlines in regards to minstrelsy.[1]

Section of the Decca Numerical Catalog ca. 1950 from the Popular Culture in Britain and America Database

In his chapter “Community and History: The African-American Church and Sacred Quartet Singing in New York City,” Ray Allen describes how the Southernaires emerged out of the black university tradition pioneered by the Fisk Jubilee Singers. The group was formed in 1929 and quickly gained acclaim for their national radio show “The Little Weather-Beaten Whitewashed Church” which featured traditional spirituals, secular southern folk songs, sermons, recitations, and guest speakers. They went on to record a number of records with label Decca, although these were never as successful as their radio show. While I faced a surprising amount of trouble in procuring information about this group, Allen asserts their importance by stating:

“The Southernaires’ smooth, barbershop harmonizing and rhythmic arrangements of spirituals undoubtedly influenced many black vocal groups of the 1930s and early 1940s, and introduced white radio audiences to the magnificent black university style of quartet singing.”[2]

The context provided by Allen raises new questions about the appropriateness of Welkes’ request. Her language certainly emphasizes their otherness in the context of her own whiteness, but their agreement to perform makes sense in the context of their commercial careers. As radio performers, they already had little control over who could listen to their music, and indeed the article shares that Welkes had already heard their broadcast. The significance thus lies in the choices made by Welkes and the author of the article when speaking about the event. The act of performance was itself not problematic, but Welkes’ word choice betrays her biases, giving us key insights into the psyche of the white observers of black sound.

“Decca Numerical Catalog, circa 1950.” The Rock and Roll Hall of Fame and Museum. From Popular Culture in Britain and America, 1950-1975. Accessed 9 October 2019. http://www.rockandroll.amdigital.co.uk/Contents/ImageViewer.aspx?imageid=1097658&searchmode=true&hit=first&pi=1&vpath=searchresults&prevPos=1011575.