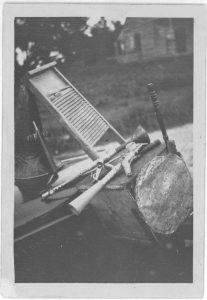 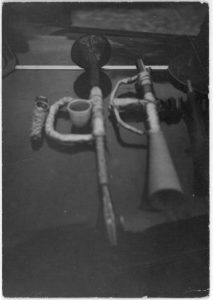 Even though my career as a washboard virtuoso was neither long nor successful, nostalgic recollections of my wild adolescence resurfaced when I found photographs of homemade instruments in The Lomax Collection. Personal experiences aside, the usage or repurposing of household items as musical instruments is an aspect of folk music, and the adjacent genres like country and bluegrass, that is worth further examination.

The Alan Lomax Collection  [1] contains documentation from ethnomusicologist Alan Lomax’ field research on folk music locally in the US and internationally. The pictures chosen are from Lomax’ early American research between 1936-1950, while working for the Library of Congress. To accompany the photographs, I have chosen a recording from 1941 by performer Wayne “Gene” Dinwiddie. The recording begins with him explaining how he made a wind instrument and then he performs a song with it.

Bruno Nettl states in his article [2] on folk music in Encyclopædia Britannica that it primarily refers to the music of the majority, “particularly the lower socioeconomic classes”.  Other keywords from the article are “informal”, “social function” and “participatory” which may indicate an improvised and impromptu culture for musicmaking.  He stresses the inclusive, ‘low-bar for participation’ culture. Knowing this, we can begin to understand the need for making instruments or utilizing every-day items. The photos show a wide array different types, varying form wind instruments to strings and percussion.

Primary source; From the Lomax Collection: