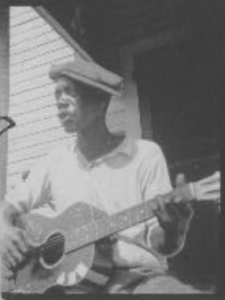 When visiting the Library of Congress’s Lomax Collection, I was intrigued by the photos on the main page, which featured an African American man playing guitar (right). Clicking on the image, I saw “African Americans–1930-1940” listed as one of its categories, and clicking on that led me to a list of other images of African Americans in this time frame—standing, sitting, walking, running, and doing other normal, everyday activities, including more guitar playing (below).

In contrast to these photos, the following two images also caught my attention, captioned according to the Library of Congress’s summaries:

Left: “The new South facing its knotty land tenure problem:” Seven illustrations from Mid-Week Pictorial, May 23, 1936, showing conditions in the South, including a man with a horse, poor children, a shack, an Alabama steel mill, construction of a house, and African American cotton pickers.4 Right: Cartoon shows two men with rifles, walking away from a lynching victim hanging from a…5

These were some of the few images listed that were not plain photographs, but images of commercial publications. As both feature whites, they were likely both intended for white audiences. More striking, though, is their representation of African Americans. The title of the first image, “The new South facing its knotty land tenure problem,” in addition to the summary’s indication that it is seven illustrations “showing conditions in the South,” would indicate that it is attempting to portray a broad view of the South. African Americans, though, are depicted only as cotton pickers, confining their place in the South to the cotton fields. The second image is even more striking; the two figures in the foreground are whites with guns, and in the background is an African American hanging from a tree, a lynching victim. This shows an even more explicit and extreme racial dynamic.

Neither of these images are surprising in their content, but stand in stark contrast to the many other images in the collection showing African Americans engaged in non-stereotypical and non-confining activities—acting like “normal” people and even playing “normal” Southern music. These two publications publications serve as a reminder that, for most of the commercialized white South of the early 20th-century, African Americans were African American first and Southerners second. They were cotton pickers and lynching victims, separate from the culture of white Southerners, from their horses and poor children to their banjo- and guitar-playing, despite the evidence we have that they were part of these cultural and musical phenomenon just as much as Southern whites.

5 Chase, William C. Man and son walking with guns, and man hanging from tree in background, and the / Chase. 1935. Drawing on illustration board, crayon. Cartoon Drawings, Library of Congress, Washington, D.C., https://www.loc.gov/pictures/item/2016679638/.