Henry Finck’s 1906 article “Creative Americans: Edward MacDowell, Musician and Composer” was published in Outlook, a New York-based magazine in operation from 1893-1924. The article’s opening lines casually establish Finck’s authority on MacDowell by stating that in the summer of 1895 he “spent a few days with Edward MacDowell in a hotel on the shore of Lake Geneva.”[1] He further drops a subtle brag that MacDowell was “sorely tempted to ask my advice about various details, but refrained for fear of breaking into my vacation.”[2] 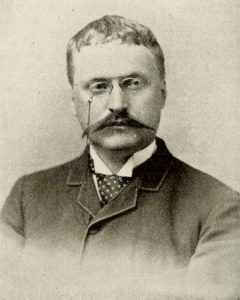 This is Henry Finck. In addition to having an impressive mustache, Finck was an American music critic. Although German and a Wagnerite, he distrusted Germany. His 18 publications include Wagner and his works: the story of his life, Richard Strauss: The man and his works, Songs and Song Writers, an autobiography, and books on gardening and food. Finck was a music critic at the Evening Post for 43 years and a lecturer at the National Conservatory of Music (alongside Dvorak).[4]

The purpose of Finck’s article is not consistent. The first page seem to build up to the thesis that “It is time to drop the ludicrous notion that a truly national art can be built up only on folk-songs.”[5] This theme, particularly the importance of individuality, is further developed through the third page. Finck then suddenly switches to a lengthy discussion of MacDowell’s education. Interestingly, in this section Finck uses the same revering tone that he describes MacDowell using towards his own idols (particularly Liszt and Raff), even going so far as to assert that MacDowell was “the greatest pianist this country has produced.”[6] Finally, Finck ends with a quick overvi 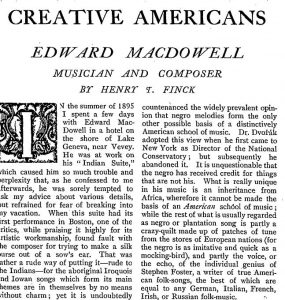 ew of what he considers to be MacDowell’s best pieces and mourns the “loss to American music” caused by MacDowell’s death. He never seems to return to his “thesis” that individuality is the key to building a national art. In this way the article has a unique mix of informal musicological argument and half reverent biography.

I came upon this source about MacDowell while searching for more context on Dan Blim’s essay “MacDowell’s Vanishing Indians.” I was excited to find this article because it seems to contrast some of Blim’s arguments. Blim’s essay states that:

“[A] so called “Indianist” movement had emerged, placing Native American subjects at the fore of US musical nationalism. Pisani attributes the success of this movement in large part to the participation of Edward MacDowell, the preeminent American composer of the day, who premiered his Second Suite for Orchestra with the moniker ‘Indian,’ in 1896.”[7]

While Blim only quotes Pisani on this point, he does not refute it, leading me to the conclusion that he agrees with this argument. Blim in fact seems to take the argument for granted as it is presented in the portion of the essay dedicated to context. Although it perhaps was a personal issue that I didn’t catch this distinction the first time around, my first experiences with the article led me to think that Pisani’s claim was indeed a central pillar of Blim’s own argument.

“…never indorsed the view… that a great American Temple of Music might and will be built with Indian songs as the foundation-stones. Nor has he ever countenanced the widely prevalent opinion that negro melodies form the only other possible basis of a distinctively American school of music.”[8]

In combination with his own argument that individuality is the key to building up an American school of music, Finck’s interpretation of MacDowell’s intentions (or lack thereof) contrasts with Pisani’s claim that the “Indianist” movement was conscious and deliberate. Finck only speaks towards MacDowell’s intentions, and because actions and intentions are not the same, it is highly plausible that both Pisani and Finck are correct. I synthesize these conflicting arguments into the claim that MacDowell did not intend to participate in the ‘Indianist’ movement but was nevertheless accidentally a key player in the construction of a US musical nationalism.

This was but one interesting tidbit in a rather long article. Other intriguing morsels that I don’t have space to unpack in this blog post include:

1 thought on “Henry Finck & the Construction of An American Sound”