The video series The March of Time was shown from 1931-1951, and provided Americans with a subjective take on current affairs or history. It reached a large amount of the American people, and “informed” many on issues they otherwise might be ignorant to. The video segment I will be focusing on is titled the “Birth of Swing”, published in 1937. To trace the history of any one branch of jazz is a difficult task, and it is all too easy to romanticize the story. Unfortunately, The March of Time does exactly that. However, the video does provide insight into one narrative that was widely disseminated on the origins of swing music. I would encourage you to watch the full, seven minute video here.

The popularity of swing music is undeniable, and The March of Time certainly addresses this. But not all swing is created equal. Swing music is described as being “accepted at Manhattan’s ultra-formal Rainbow Room” and “is indispensable at dark Harlem’s hot and noisy Savoy”. This fits into the picture painted by other musical accounts as well. To white audiences, as well as some champions of the Harlem Renaissance, jazz was music that had to be lifted up to a higher state and accepted by systems that previously would have turned from it. 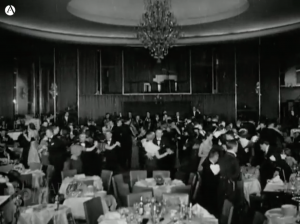 Swing music as presented in “sophisticated” clubs like the Rainbow Room. 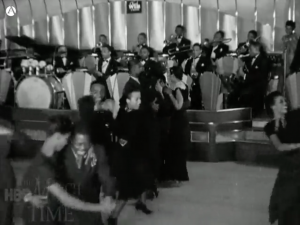 Ultimately, the video concludes that the Original Dixieland Jazz Band not only contributed to jazz idiom, but also was the foundation for swing music. This conclusion is not inherently flawed, and certainly has convincing evidence. Yet the context in which it is examined has some significant flaws. The narration states that “In England, Oxford students form a Hot Club. Members seek to determine whether this new music originated with the African or the Indian.”

The verbiage of “the African” and “the Indian” point towards an inherent bias in viewing those people as “other”. Arguably a third option should be included, one called “the white American”. Instead, the Original Dixieland Jazz Band becomes the savior of a sort. No, white Americans don’t need to worry about the popular swing style as coming from “the African or the Indian”. One can be perfectly comfortable enjoying the civil music developed by a group of white musicians for a respectable audience.