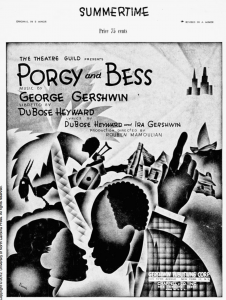 Cover to a sheet music from Gershwin’s opera, Porgy and Bess

Porgy and Bess is as much of a serious, classical work as it is a political work. Porgy and Bess was created in collaboration with composer George Gershwin, and lyricists Ira Gershwin and DuBose Heyward. This cultural opera has been a prime example of the struggle of black and white relations and racial equality in art and performance. In his letter to Gershwin regarding Act II, Heyward writes to Gershwin explaining his ideas regarding a dance in the scene and the overall authenticity of it. 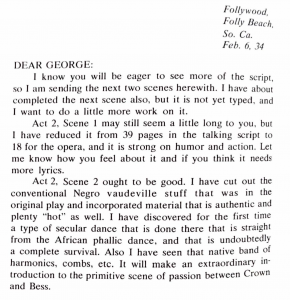 Letter from Hayward to Gershwin found in “George Gershwin: His Journey Towards Greatness”

Why is Porgy and Bess a popular topic when it comes to talking about the racial history of America? Firstly, it was composed, written, produced, directed, and critiqued by white people; yet it is about the behavior, beliefs and expressions of black people. This does not have to be problematic. However, as soon as people start making claims to authenticity, then it is problematic because people outside of a culture are adapting another culture without having experienced it or having fully understood it.

Many of the reviews that circulated when Porgy and Bess premiered praised the authentic of portrayals of black culture. The opera itself does not represent black culture and does not inform us of what was authentic (because that is always a moving target), but it informs us about the white perceptions of authentic black culture. Because most reviews addressed authenticity, this is a prime example of the fantasy that the journey to racial equality was “easy” and quick.

The making and remaking of Porgy and Bess is a case study in the ways that white Americans in the twentieth century craved stories about African Americans featuring earthy authenticity and frictionless progress toward racial equality. ~Ellen Noonan

In DuBose’s letter to Gershwin, it is interesting that he used language like “primitive” yet the work was a prestigious and accepted genre: the opera. This seeming juxtaposition highlights the idea that people were willing to ignore the fact that this opera says more about white perceptions than authenticity of black culture. This omission mollified guilt and does not challenge any fantasized perceptions, making it the idealized path to racial equality.

Many of these critiques of Gershwin’s opera are also relevant today. It is important when performing works from other cultures to be conscious and well informed of personal perceptions and what is authentic.