Amidst the vast collection of Vinyl records found within the Halverson music collection, one album that stands above so many is “A Love supreme” by  John Coltrane. This album, recorded in January of 1965, has become one of the most popular and well known records ever created. The release of this album brought John Coltrane to a new level of recognition and fame and it serves as a staple of Hard Bop and free form Jazz and spiritual music. Being a 4 part “suite” the album is divided up into multiple movements, beginning with the “Acknowledgement” then moving to the Resolution”, “Pursuance”, and “Psalm”. This album, which was intended to be a spiritual album, makes a direct connection to Coltrane’s mindset that his talents and abilities come not from himself, but rather, from a spiritual higher power. 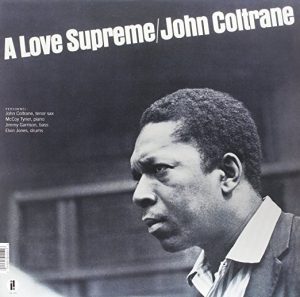 Album Cover for “A Love Supreme”

One of the things that makes this album so unique is that it was recorded in a single studio session, in a single day of January 1965. The group was a single quartet featuring pianist McCoy Tyner, bassist Jimmy Garrison, and drummer Elvin Jones. Coltrane was featured solely on Tenor Saxophone. The piece was recorded at Van Gelder Studio. Rudy Van Gelder is regarded as the most important Jazz recording engineer of all time who had worked with other Jazz legends such as Thelonious Monk and Miles Davis. This album was a representation of Coltrane’s person struggle with faith and purity, expressing his deepest gratitude for the spiritual gifts he had been given.

The only recorded live performance of the “Love Supreme” suite, was from a July 26, 1965, performance at the Festival Mondial du Jazz Antibes, Juan-les-Pins, France. This performance was also remastered and released in a 2002 two-CD set by Impulse! Records with the original album and additional studio outtakes.