The Jackson 5 experienced incredible success, and one article published in the Chicago Defender reports on the group’s wildly popular performance in Chicago in 1971. “[T]he teenage idols of the entertainment world took their places on stage beneath roving spotlights while the frantic screams of young girls, waving and stomping their feet at the mere sight of the Jackson 5, spill; lit the air with feignish delight.” 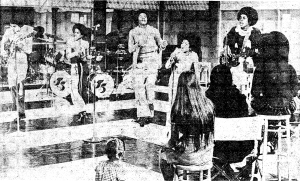 Performance had certainly come a long way since the singing of songs in slave fields. I also would argue that Motown musicians, and The Jackson 5 in particular, broke past performance practices of viewing black performers as “exotic” or “other”. Indeed, the article in the Chicago Defender comments on their performance ability rather than their racial identity. “The young entertainers swept through the evening ordeal with tremendous poise and with the assurance of old-timers. Their performance was [characterized] with a crisp sense and refreshing sense of buoyancy.”

One of the songs performed that night in Chicago was their number one hit single “I Want You Back”. This song showcases many of the Motown characteristics. Listen to the “driving bass line” in the opening of the song, and the “interplay between the lead singer and his or her backup vocalists” throughout the song.

As you’ve heard, The Jackson 5’s music is infectious, and it is no surprise that they reached international success. One critic writes on the successful aging of The Jackson 5 in the music -focused newspaper Zoo World. “Each new album releases keeps getting better and better…The musicianship is of course of the highest quality”.

Again, commentary is focused on the music of the group. This represents a huge shift in cultural perception. While Motown groups contained predominately black musicians, it was the music that sold and topped popular music charts of the day. Musical elements dominated the conversation surrounding Motown and The Jackson 5, and such discussions highlight the past musical influences of spirituals and ring shouts on the Motown sound.