Late 1800s through early 1900s America was not a great time to be African American. I am not meaning to imply that African Americans have ever had it particularly well in America, but African American welfare throughout American history is a topic of whose discussion would be well beyond the scope of this blog post. Nonetheless, despite any social and cultural forces acting against them, African Americans still managed to keep spirits up and fight for a better future for them and their children. One of the ways they did both of these things was through singing spirituals. In slave times, the spiritual served as a musical outlet with which to keep spirits high, (or at least as high as one can keep spirits while enslaved) and a way to spread hidden messages, frequently about the Underground Railroad, without the slave-drivers realizing. After the Civil War, spirituals continued to aid in keeping spirits high, but took on the additional role of being a powerful force with which people used to fight for civil rights. One example of this is the Fisk Jubilee Singers. 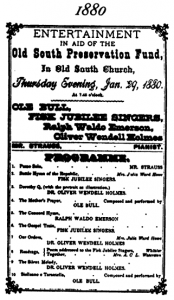 The Fisk Jubilee Singers can be heard in this recording1 singing the spiritual Golden Slippers. They were a group of singers from Fisk University in Nashville, Tennessee who became well-known after touring the United States and the world singing spirituals. However, one of the less remembered parts of their legacy is that of their civil rights tours from 1879 to 1882.2 As can be heard in the recording, the Fisk Jubilee Singers brought a style of singing and harmony to the white world that had been previously unknown and, in the process, won international fame for their university. While the Fisk Jubilee Singers were by not means the only African American musical ensemble singing spirituals,3 they are the most famous and remembered example to this day