As evidenced by the artwork on the album cover and liner notes of this 1961 LP recording of Richard Strauss’s Salome,1 the artists involved in making this recording aimed to create an atmosphere of exoticness, the East, and “Otherness.” On the cover, Birgit Nillson, who plays Salome, bears her teeth and pointed, red nails in a vicious, animalistic stance, and on the liner notes, the illustration focuses around the exotic peacock motif. 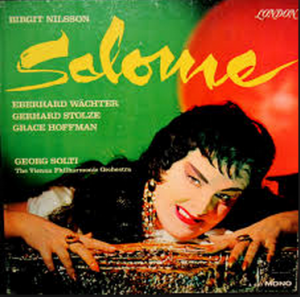 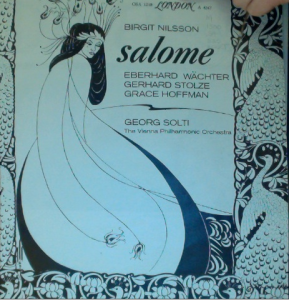 The opera aims to portray “Otherness” in more ways than just the visual. In terms of the libretto, as the liner notes state, “Its exotic language caresses an exposed nerve in the type of elegant audience for which it was written.” As for the music, the notes read, “Strauss enclosed Wilde’s drama in music that is . . . extraordinarily concise yet lavish in detail. Mood is everything: from the first clarinet notes one is plunged into the Byzantine night and the tension is never relaxed.” With Salome, Strauss aimed to create a comprehensive portrait of the “East” through which to portray a story of violence and immorality.

As I listened to the final scene of Salome on Halvorson Music Library’s own copy of this LP, I noticed several elements of auditory “Otherness” in the music. At the beginning of the scene, sudden crashes of brass and percussion are reminiscent of Classical era uses of the sublime to convey terrifying foreignness. Surprising keys and chromatic turns have a similar effect. Toward the end of the scene, Strauss conveys exoticism through the clarinet, whose chromatic motif evokes the Asian/North African street tradition of snake charming. As the opera ends, percussion reverberates like a gong (there may even be a gong in the second recording below) and a blaring trumpet enters unexpectedly to play the closing melody. I included a Youtube recording of the Vienna Philharmonic with Birgit Nillson2 (similar to the LP recording I listened to) as well as a Youtube recording of Nillson at the Metropolitan Opera3 for an American comparison. I noticed that the closing trumpet in the Met version sounded even more raw, jazz-like, and surprising than its European counterpart. Perhaps this is because, for white Americans, jazz automatically signifies a racial “Other” as well as lowbrow music.

All of these “exotic” elements are so noticeable, however, because the basic auditory backdrop of Salome is Western. The orchestra consists of European instruments (like the clarinet) that play in an “Eastern” manner instead of actual instruments from ancient Judea (southern Israel) where the opera takes place. Too, the unexpected harmonies–while used in an Orientalist manner–are not uncommon for a piece of Modern music, so they would not have been scandalous to the ear when Salome first arrived.

So how does all of this relate to American music? Let us put the music of Salome in the context of its failed opening performance at the Met in 1907. As the audience watches a high art version of Salome portraying subversive female sexuality through dance, it also hears music that evokes the “East” but ultimately asks to be taken seriously as high art. The European fabric of Strauss’s music makes it difficult for audiences to dismiss it as inferior, but the “exotic” auditory decorations are frequent enough to cause discomfort. For this reason, the music of Salome contributed to the tensions over legitimate and non-legitimate art that caused the Met audience to reject the opera.