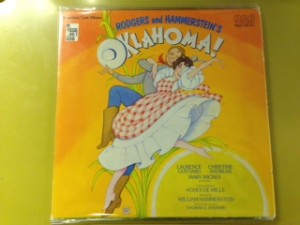 Oklahoma! the musical opened on Broadway in 1943, the first written by the Rodgers and Hammerstein duo. The musical premiered during WWII when this show was needed to provide an escape for Americans from the horrors of war. It ran on people’s nostalgia for the great American West and a time of “no conflict.” The show, interestingly, leaves out Native Americans and any hints of conflicts that actually occurred in the Midwest.

Oklahoma! centers around a cowboy named Curly, his romance farm girl Laurey, and Jud the farm hand who Laurey develops feelings for later on. It’s set in the town of Calremore, OK in 1906. Laurey and Curly represent the “wholesome American” ideal that was common in mythic story around WWII. Cleanliness and a separation from “animal nature” in humans was a critical part of this image, and it was science and technology that were seen as essential to their achievement. For example, women during this time were discouraged from nursing their babies; bottles were considered more hygienic than human tissue. “Scientifically-concocted” formal was said to be more wholesome and nutritious than breast milk. Modern was equated with wholesome and good.

By tapping into this “modern” movement, Oklahoma! became a raging success. It ran on Broadway for over 5 years. According to the Manitou Messenger, even the St. Olaf Theater Dept. put on its own production of Oklahoma! in 1962.

Recently, Seattle’s 5th Avenue Theatre’s 2012 made waves with its production of Oklahoma! with its choice to reflect the historical presence of African Americans in the Oklahoma territory because it amplified “one of the ugliest stereotypes in our history: an imposing black man ravaging a petite white woman and the white hero.”1 It made “clear references to lynching…the “Dream Ballet” had a sinister, sexual tone and ended with Jud dragging Laurey away to be raped.” 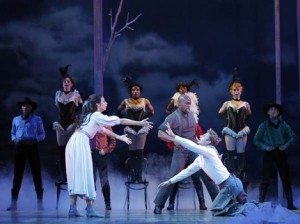 Jud appears to be keeping Laurey and Curly apart in the “Dream Sequence” in 5th Ave. Theatre’s 2012 production of Oklahoma!3

One critic wrote “Rothstein’s (the director) Oklahoma! is now the story of a crazy, sex obsessed black man … lusting violently after his white mistress, who ends up murdered at the hands of a white man, who gets off scot free after a mock trial.”2

So what’s worse? The original Oklahoma! blatantly leaves out all minority groups to try an create this sense of nostalgia for “simpler times.” But, the 2012 Seattle version obviously reinforces horrendous stereotypes in an attempt to include African Americans in the show. Should we try to include minority groups that were originally written out of the show or try and fit them in? It seems like neither is a great option…