I’m certain that if I asked the class if they’d ever heard to Sister Rosetta Tharpe, not many would recognize the name. Tharpe grew up a gospel singer, both of her parents preachers, but what set Tharpe apart and probably what kept her from reaching the fame of the Arethas and the Ellas was her Rock ‘n Roll influence. Tharpe struggled to find a place as a successful musician while remaining a devout religious woman. Her inability to claim a single genre and run with it made Rosetta so remarkable, yet it is what kept her from reaching the top. Her unique guitar style along with her gospel like vocals made her a sensation, but her audience wasn’t one that could follow her as she wore too many hats. In an article in the New York Amsterdam News writes of Tharpe’s bounce back and forth between singer and church-goer. 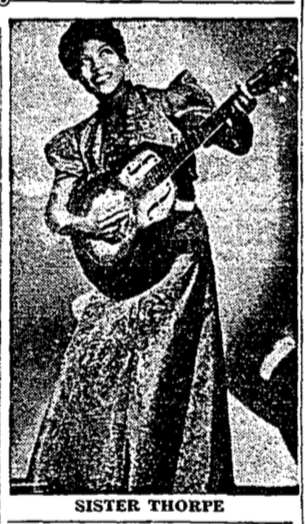 The author, Jay J. Aye detailed her flip-flop between nightclubs and church and wrote, “Earlier this year after she [Tharpe] announced she was through with night clubs and would sing only in churches… Now, it looks as if the night club bug has stung Sister Tharpe again.” One wonders if Tharpe felt pressured by the music industry to go outside of the church, or whether her familial ties to the church held her back from truly reaching her full potentials as a Rock ‘n Roll singer with a gospel edge. Tharpe’s performing medium, while varied and inconsistent, was one she must’ve grappled with and one that music historians must take into account when studying her interesting and unique career.