“It’s not unlawful to sing or play any kind of music in the United States of America, no matter how good or bad it sounds. Jazz is based on the sound of our native heritage. It is an American idiom with African roots-a trunk of soul with limbs reaching in every direction, to the frigid North, the exotic East, the miserable, swampy South, and the swinging Wild West.”[1] 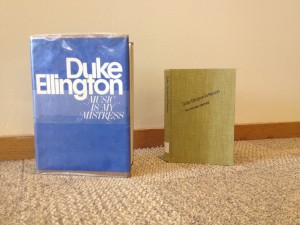 This passage from Duke Ellington’s autobiography, Music is my Mistress, hints at his plain writing style and his lifetime success in jazz. Ellington wrote his biography for the celebration of his 70th birthday in 1973, but its intent is not entirely clear. While he has a few revelations on music, God, and his Sacred conventions, to share, most of the book is spent listing the unique experiences he had and the many people that he worked with or that influenced him, all of whom are described as “good guys.” As Eileen Southern said in her book review in The Black Perspective in Music, “a great deal of essential data is missing…nowhere in the book is a hint of the pain Ellington must have experienced.”[2]

In contrast, his son Mercer Ellington wrote a memoir of his father that painted a much different picture of his life. Perhaps tainted by his experience of not seeing much of his father, Mercer summarizes some of the moments when Ellington was sidelined because of his race, such as when Ellington wrote Black, Beige, and Tan as a parallel and critique to African American history and received a patronizing response from critics or the many moments that Ellington had to prove his bands’ worth in comparison and competition with white jazz bands.

Perhaps the fact that Ellington left out the more bleak and tough moments of his life shows his view on protesting racial issues. Mercer quotes his father, “’I think a statement of social protest in the theater should be made without saying it.’”[3] His piece, Black Beige and Tan, and his 1963 cover of Gershwin’s Rhapsody in Blue have undertones of critique on white appropriation of jazz by the virtuosity, styles, and stories that he implements, but they have to be inferred. Arguably, these conflicting accounts also show Ellington contributing to the white narrative of jazz. Ellington’s success was not only because of his talent as a musician and bandleader, but he did not outwardly fight the racist structures controlling his profession. Since his autobiography was published at a time when Ellington was celebrated by white audiences as a successful American jazz musicians, it makes sense that he chose to leave his African American experience out.