I took an interest in “patting juba,” a form of music-making created by African Americans in the 19th century, because of the patterns, the musicality, and the songs that accompanied it. There is little information on the specific type of dance, however, and the first primary source I encountered was a racist “example” of a juba text penned by a Boston-based writer. Juba has finally gained the appreciation of historians and musicians as viable folk music, but the dance form’s history serves as a reminder of that music as a way to stereotype African American traditions.

Juba came from dances in Africa (where it was called Giouba) and Haiti (known as Djouba). Another name for the dance is Hambone. This name, which also has origins in slavery, supposedly originated from “hand-bone,” the hard part of the hand that makes the most sound.

Juba is characterized by complicated patterns (they generally involve 3-over-4 rhythms), now-obscure steps like the ‘turkey trot’ and ‘pigeon step,’ and corresponding rhymes. Arguably, the most well-known rhyme, used by juba and hambone performers alike, is called “Juba Juba:”

There are numerous variations to the lyrics, but the first two lines nearly always remain the same. Danny “Slapjazz” Barber explains the meaning as part of an apprenticeship project in Figure 1. He begins talking about the song at 2:02, continuing on to describe its history.

As was the case with slave songs, many spectators didn’t accurately record juba steps, often deeming the dances wild and immoral, or forgoing descriptions by stating that the movements were beyond words. It wasn’t until minstrel shows in the mid-1800s that juba became known to a larger white audience. Minstrelsy’s appropriated juba has a complicated relationship with the dance and its origins. Scholar Andrew Womack notes that minstrel shows hugely influenced American culture, and that the characters presented were dimensional, albeit offensive and highly stereotyped. One such character was Master Juba, played by free-born African American William Henry Lane. Lane’s character is easily one of the most recognizable personas in minstrel history, and the surname quickly evolved into a stock title for black characters. Traveling with an otherwise all-white cast, Lane performed his dance, described as a combination of juba and a jig, in America as well as Europe. He was seen as a novelty, but observers were nevertheless impressed by his skill. As The Manchester Examiner wrote:

“Surely he cannot be flesh and blood, but some special substance, or how could he turn and twine, and twist, and twirl, and hop, and jump, and kick and throw his feet with such velocity that one think they are playing hide-and seek with a flash of lightning!” 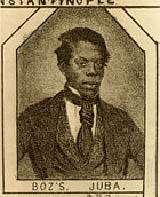 On the other hand, white writers commonly used juba as another opportunity for stereotyping African American dialect. In Figure 3, Frances E. Wadleigh uses slurs, an overexaggerated dialect, and offensive caricatures to showcase the “current literature” of black music.

In spite (or, in some cases, because) of the appropriations, juba has remained in mainstream culture. Variations of the beats and rhythms have made their way into modern music, most notably in Bo Diddley’s song, “Bo Diddley’s Beat.” Hambone has been preserved and taught as a black folk melody, particularly in the south, and the dance steps are widely seen as a precursor to the jitterbug. Though juba was used as a vehicle for stereotypes, the dance and music have become an important part of American culture, and another example of how influential the songs–both original and appropriated–have become.

2 thoughts on ““Juba This, Juba That:” the history and appropriation of patting juba”