In our class discussion on racial uplift during the Harlem renaissance, we talked about W.E.B Du Bois’ idea to uplift the African American race through highlighting the smartest and most educated Black people, who he called “talented tenth.” His idea relied on talented Black people to climb the social ladder and prove to white society that the race is just as capable of brilliance as white people. This applies to our class because the music of Du Bois’ time often reflected his ideas; European influences were a staple of music of the Harlem renaissance. Here is an example of French influence in Florence Price’s “Night,” sung here by countertenor Darryl Taylor.

However, some of Du Bois’ contemporaries had different ideas for racial uplift. Even before Du Bois published his 1903 essay “The Talented Tenth,” Booker T. Washington had created a plan that emphasized racial solidarity and education through crafts and skills as well as academics. His plan was to highlight the necessity of regular African Americans in regular American society, rather than to highlight the talents of a few brilliant African Americans. (PBS)

When searching through African American periodicals, it is clear that scholars of the time had lots of different opinions when it comes to racial uplift. Here are a few examples (State Journal (1883), Freeman (1911), (Savannah Tribune 1913). 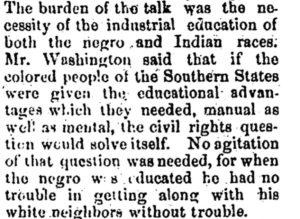 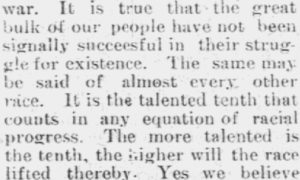 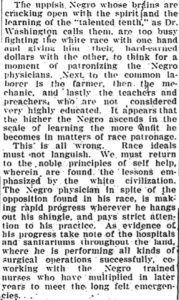 It is common for majority groups such as white Americans to see minority groups as a monolith, but the varying opinions of African Americans of Du Bois’ time remind us that like all groups of people, Black Americans did and continue to have a wide variety of ideas, perspectives, and backgrounds.