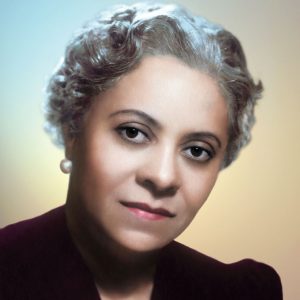 Florence Price is one of many early 20th century Black American composers who had to navigate creating “American” music. Price had added difficulty making a career out of composing in a white male-dominated field as a Black woman. Still, Price rose to prominence after winning the 1932 Rodman Wanamaker Music Contest with her Symphony No. 1 in E minor and her piano Sonata in E Minor. This Chicago Defender article was published in 1935, three years after the awards it describes. The Wanamaker Contest was a competition sponsored by northern philanthropic donors to uplift Black composers.1

Like the Wanamaker Contest itself, Price sought to introduce Black music to white audiences through classical idioms. Price was more subtle with how she incorporated Black music into her compositions than some of her colleagues. This more hidden approach led to criticism from some Black music critics. Many Harlem Renaissance thinkers believed using Black music in classical settings was a form of racial progress.2 However, Price found a delicate balance between predominantly-white concert spaces and Black folk music to create nationalist music.

“See what the Negro has taken from his own idiom and with good technique is beginning to develop alone. There is a real American music and Mrs. Price is speaking a language she knows.”3

It is fascinating that Lissfelt uses the analogy of language for how Price develops her pieces, as language is a good way of understanding how Price composed. In her dissertation, Samantha Ege deems Price’s subtle use of Black folk idioms to be “musical code-switching.”

For example, in her award-winning Sonata in E Minor II. “Andante,” Price switches between a spiritual theme, a Chopin-inspired theme, and a Schumann-inspired theme.*4 Price seamlessly intertwines familiar Black folk idioms with the classical forms and harmonic structures that she studied at the New England Conservatory.

Price’s racial ambiguity may also have been a factor in her more subtle compositional style of musical code-switching. When enrolling at the New England Conservatory, Price’s mother listed Pueblo, Mexico, as her hometown, hoping that she would face less racism if perceived as a Latina woman.5 This experience may have informed her musical code-switching as a language Lissfelt notes is familiar to Price.

This article’s reflection on Price’s 1932 Wanamaker Contest victory offers insight into her perception a few years after her rise to prominence. Lissfelt’s comment about musical language reflects that Price’s (musical) code-switching is “familiar” to a large portion of the American population and that nationalist music can reflect that reality.

4 Samantha Ege, “The Aesthetics of Florence Price: Negotiating the Dissonances of a New World Nationalism” (Ph.D. Thesis, University of York, 2020), 95.