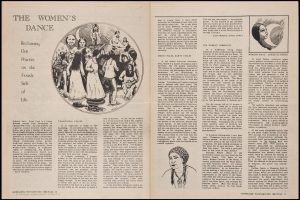 This first primary source I came across was written by Katsi Cook, a young Mohawk woman, “lay midwife and organizer around women’s health care issues” who played a vital role in Native American women’s advocacy and health. She is the found of the Women’s Dance Health Program in Minneapolis, MN- “translating traditional concepts into a practical tool” for women’s health. Cook goes in great depth about the “origin” of the woman and how various cosmologies have shaped the way that women are viewed in the Native American culture and how they’ve viewed themselves. Cook’s descriptions of the traditional view and journey to womanhood in the Native American culture leads to the emphasis on the dire need for women, the “center of the Circle of Life”, in their culture.

“Women are the base of the generations. They are the carriers of the culture.” -Katsi Cook 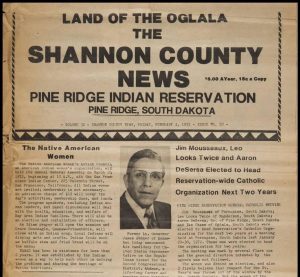 I found a newspaper article that supports the theme of the importance of women and the strong role that they have in the Native American culture. This article advertising the Native American Women’s Action Council stood out to me in just how much importance this seemed to hold, even in the 1970s, when the US at the time was ramping up its second wave of feminism pushing for equality. But that’s the thing. Native American women are viewed as equals in their societies. In an article written by Sally Roesch Wagner, the Six Nations Haudenosaunee (Iroquis) Confederacy (Mohawk, Oneida, Onondaga, Cayuga and Seneca tribes) women have lived with “rights, sovereignty, and integrity” a lot longer than the European settlers that came after them. The suffrage leaders Matilda Joslyn Gage, Elizabeth Cady Stanton, Alice Fletcher, etc. learned a great deal from the Native American women in the late 19th century. There were stark differences in the way women were treated, viewed, and valued.

“Fletcher explained to the International Council, ‘As I have tried to explain our statutes to Indian women, I have met with but one response. They have said: ‘As an Indian woman I was free. I owned my home, my person, the work of my own hands, and my children could never forget me. I was better as an Indian woman than under white law.’” -Wagner

In reading about all the ways Native American women were able to participate and have authority over so many aspects of their culture, it made me ask about how that translated to the music. Did this egalitarian culture of the Native Americans have any influence on how women were involved in the music scene? I couldn’t help but think that it did. It honestly makes me sad that I do not know more about this type of representation. And I feel as if I have barely scratched off the very top layer on this topic. In our Western education, we put a lot of emphasis on mis- and underrepresentation of white, Euro-American women composers and performers, but there is so much more music that has yet to be emphasized and women to be recognized.