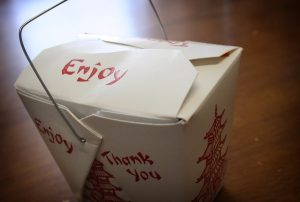 If you take a look at this photo of a takeout box, you probably don’t have to even think to know what kind of restaurant it came from; the font is clearly “Chinese.”

However, the reality is that there is nothing truly Chinese about this font at all. “Chop Suey Font” is so named because like the American food “Chop Suey,” the font has come to be associated with Chinese culture despite being an entirely American creation (Quito). The first version of this stereotyped font was patented in the United States in 1883 (United States Trademark Office) and has been frequently used in anti-Asian propaganda for the United States government (Quito). 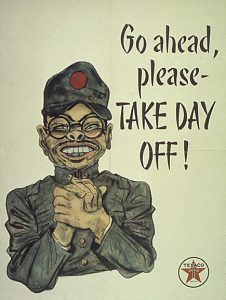 Anti-Japanese propaganda printed by the United States government in 1943. Image is in the Public Domain in the United States. https://commons.wikimedia.org/wiki/File:AntiJapanesePropagandaTakeDayOff.png

Chop Suey Font is also everywhere in early 20th century American music, where sentimentalization and satirization of people of color was a common feature of music enjoyed by white audiences. Here are four examples that I found in the Sheet Music Consortium database (My Chinese Butterfly, My Oriental Girl, Chinese Blues, Oh that Oriental Rag). 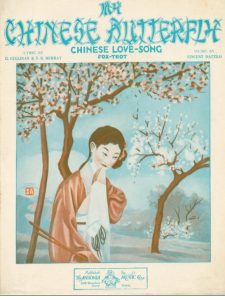 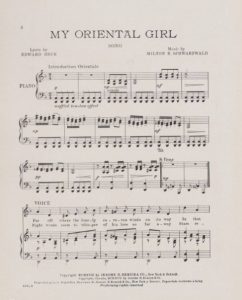 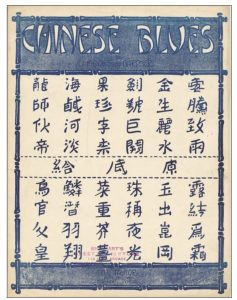 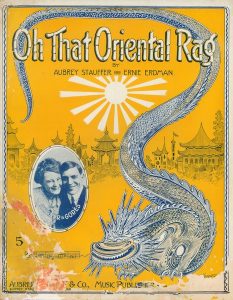 While “Oh That Oriental Rag” is not written specifically in Chop Suey font, the lettering resembling bamboo is also an example of an ethnic font, or a font associated with an ethnic identity.

The lyrics and music songs of these songs reflect American attitudes of Orientalism, which defined “Eastern” culture as different and inferior to “Western” culture. Specifically, the East was seen as untamed, seductive, and emotional, while the West was civilized, rational and logical (Grove Music Online). The songs include sensual melodies full of accidentals, sexualized Asian women as love interests, and open fifths, which are frequently used in stereotyped representations of Eastern music, perhaps because of their bare and “primitive” sound.

With Chop Suey font so often being used in disparaging contexts, it is worth wondering if the font should be used at all, especially by white people. However, the font is also frequently used by Asian American business owners, which reminds me of our discussion of how early 20th century Americans of marginalized ethnicities often satirized their own identity in order to sell music to white audiences. Like many facets of American culture, Chop Suey Font is a remnant of America’s past that reminds us to consider the less obvious ways in which our country’s history of racism continues to pervade our society.