I was quite “successful” in finding sources for this blog post, and please take the air quotes with a lot more weight than a grain of salt. Let’s just say I wasn’t super thrilled with the plethora of findings I had in searching this topic. This post “piggybacks” off of my last post talking about fascination. Let the conversation continue!

It should be no surprise that Asian Americans have constantly dealt with harsh racism throughout American history. Although, the proof of this racism can be found in the musical scene of the first few decades of the 20th century in particular. From derogatory slang to severe stereotypes, this music is not lacking in either. The interesting content I found can seamlessly tie to Eric Lott’s thoughts, despite his focus on specifically blackface minstrelsy, points to the dichotomy regarding “love and theft” and “envy as well as repulsion” (page 8) in regards to how white people have gone about these traditions.

I found numerous pieces of sheet music alluding to this dichotomy of this expropriation yet strange eroticization towards Asian people. For example, in From Here to Shanghai, a song written in 1917 by Irving Berlin, it explicitly brings up various aspects that Americans tended to deeply stereotype the Chinese. It references sitting in “bamboo chairs”, “sipping Oolong tea”, pairs of “wooden sticks”, “Chinaman that speaks away up high”, and the list goes on. This song alludes to a sense of fantasization of the Chinese- “I’ll soon be there”- referring to almost an urge to want to see this culture that differs from America. 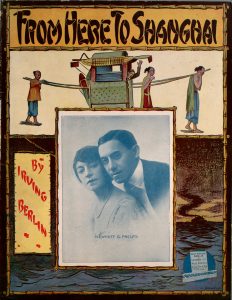 Another source I found points to the side of the dichotomy revealing themes of “envy” and eroticism. Where the Yang-Tze Ki-Ang Flows talks about the narrator wanting to find a “sweet little China pearl” with “dreamy almond eyes.” It goes on in this “search for love”: “I’ll fix my lips for some Chinese kisses” and “I’m going to find what Chinese bliss is.” 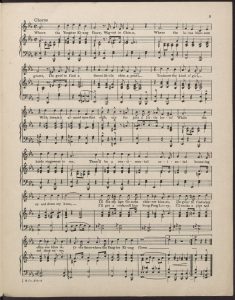 This overtly reminds me of the quote in Lott’s book:

“…because they were so attracted to the culture they plundered” (page 8). 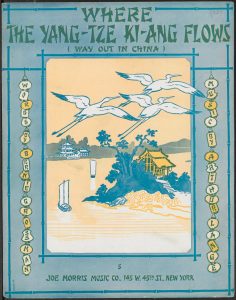 It is painfully clear that there was an immense, oddly obvious attraction to the Chinese. This seems contradictory to other lines in the song that again refers to stereotypes and terrible generalizations. I couldn’t help but make the ties between this type of music with the practice of blackface minstrelsy. These songs written about the Chinese people can define the whiteness and white perspective of most likely a large chunk of the American society, especially considering the political climate emerging from the Chinese Exclusion Act published in 1882.

The underlying themes that we’ve talked about in class have been perspective-altering, to say the least. The fact of how much they tie together astounds me, as well. It will be hard to look at any music from now on in a non-critical manner, which I think only benefits us as musicians in the long run.

From Here to Shanghai: