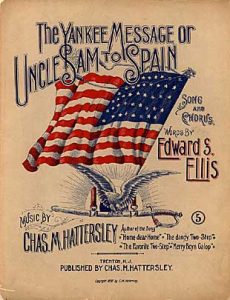 In the grand search of defining the term “American Music”, the deeper you dig, the more muddy and complicated it gets. It is seen even in this simple sheet music cover published in 1898 that the so-called “Yankee message” was something that was emphasized at one point or another, having an impact on what they coined as “patriotic music” (“Patriotic American Sheet Music.”)

The phrase “The Yankee Message” caught my eye and caused me to want to research the context and intention of this particular music. This piece of music was published and written in the midst of the Spanish-American War. According to an article from the American Mosaic talking about the Spanish-American War, for the United States, much of this war was ignited by the desire and push for American Expansionism (“Spanish-American War.”). Most Americans saw the conflict between Cuba and its colonial combatant Spain as an “in” for greater expansion and influence:

“Some were attracted by the idea of new financial markets; others were inspired by the notions of spreading the twin ideals of Christianity and American conceptions of liberty and equality to other peoples.”

This raised the question for me: “How can we look at music from this time period without the harsh influence of the American urge to be a world power?” The concept of “spreading the twin ideals of Christianity and American conceptions” made me think of the article we read by Richard Crawford pertaining to the Early Christian Music-Making that took place in colonial America where much European influence took place in the beginning formations of music in general of America when it came to sacred music-making and how colonization had a huge part in this movement of music at the time. This can point to the fact that this piece of music pointed to a sort of “patriotism”, even though much of the surrounding context revolved around wanting to gain total power and influence. It also made me think of the article we read by Drew Edward Davies discussing the topics revolving around “local music” and the music of “New Spain.” Reading about the influence that Spain had on the Latin music that has survived up until the present day (“villancico” and the Latin-Baroque style) compliments the backdrop and context of this sheet music cover from the Spanish-American war. The ideas that Davies raised at the end of their article pertaining to challenging the assumptions of particular genres of music involving various cultures that Spain (and eventually America) dominated and dialoguing about the “repertoire’s problematic issues” are ones that should be taken in consideration about these types of pieces as well.

Looking into the greater context of this piece of sheet music greatly coincided with the topics discussed around the locality and dominant influences of Europe when it comes to music produced and composed in times like the Spanish-American war and beyond. Terms like “The Yankee Message” can go beyond a simple phrase and raise questions around the context of various music composed and what directly and indirectly influenced the music of that time.