We understand music through the lens of our identity and lived experiences. Musical narratives differ, and the predominantly-known history of music is written by those whose identities hold power by associating their idea of musical skill with the self.

I thought of Neil Rosenberg’s book on the development of bluegrass, which focused on the impact of Bill Monroe’s Blue Grass Boys. 1 Rhiannon Giddens offers a more holistic perspective and insists that bluegrass is a blend of African, European, and Native traditions. 2

Musical histories like these are even harder to uncover when their records are further removed from the present and written by colonizers. One of those histories is that of the pre-Columbian Incan Empire in present-day “Peru.”

I came across a description of Inca music written in 1609 by Garcilaso de la Vega. Garcilaso was the illegitimate son of a Spanish conquistador and an Incan princess. He wrote an alternative perspective to the European version of the music that we hear about today. I submit that the praising language he uses to describe Incan instrumental music is his way of humanizing Incan identity.

Garcilaso highlights the polyphony of Incan music, noting that the panpipe consisted of four groups of four or five hollow reeds shaped like an organ,

“So that the four natural voices, treble, tenor, contralto, and counter-bass were represented by the four sets of reeds.”3 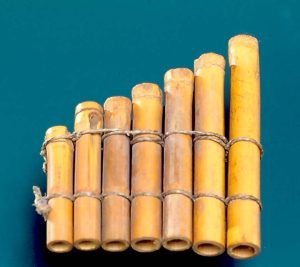 Polyphony has historically been a European marker of a society’s musical complexity. The organ was (and remains) a European instrument associated with powerful institutions like the Catholic Church. This comparison familiarizes Incan musical practices to his European audience, and it equates the cultural power of the Incan panpipe to that of the European organ. Furthermore, comparing the different reed groupings to voice parts invokes a  personal quality to the instrument.

Garcilaso continues to personify instruments when describing the use of tunes. Unlike psalmody in New Spain, Incan songs each had a unique melody. If they had shared tunes,

“It could not be known what sentiment the lover wished to express; for it may be said that he talked with his flute.”4

This description contrasts Spanish missionaries’ singing practices, implying that a song’s meaning is lost when using a melodic tune for multiple texts. The Incas valued music to the extent that they used the flute to declare love as if it were one’s voice! While we don’t have recordings from 1609, this 1950 recording shows a courtship dance accompanied by a flute typical in Cuzco, where Garcilaso lived. The flute in this recording uses the pre-Columbian tuning system, similar to the sounds Garcilaso would have heard. 5

Garcilaso’s pattern of presenting Incan instruments and musical practices as a vulnerable extension of emotions and identity humanizes this Indigenous music that Europeans dismissed as primitive.

One 1907 account written by American author Richard Milleschech reflects that,

“It is a strange anomaly that the Indians had an ear trained to harmony, and that their voices would blend when they sang in concert.” 6

Spaniards were surprised at the musical talent of Indigenous people in the Andes. Yet, polyphonic music was typical in the Collas region, of which Garcilaso writes. 7
However, Garcilaso is not immune from European ideas of innate musical talent and equating one’s musical skill with one’s being. His account of Inca music notes that the Incans did not sing when he was there because they were not good, but he spoke highly of mixed-race singers.

The Europeanized legacy of Incan music is not the only one where the voices of actual participants are largely unheard. Garcilaso attempts to challenge that narrative by taking the European strategy of associating musical talent with self-worth — hmmm, we music students don’t do that anymore, do we? — by twisting it on its head. Writing from a mixed Spanish-Incan perspective, Garcilaso associates Incan instrumental prowess with their voices, and by extent, their being.