I never read the Manitou Messenger (please don’t tell anyone I said this). I’m not a huge fan of the writing and as a senior, I’m trying to slowly assimilate to the outside world. Finding “Whatever folks are singing…that’s what makes it folk music” delighted me because it addresses ideas we’ve concluded with readings and in class discussion.

The article advertises a folk music festival at the college, encouraging everyone to audition. The article opens with a quote by Pete Seeger (the focus of my final paper) defining folk music as “whatever folks are singing; that’s folk music” (even though its so much more complex than that). Later in the article, the writer attempts to categorize folk by stating it addresses themes such as love, death, work, and historical events. 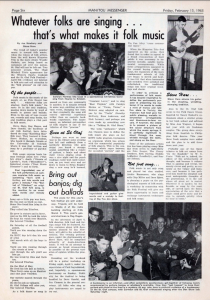 I’m not sure if this is just me, but these are extremely broad topics that doesn’t narrow down or help the reader understand what they’re supposed to understand about folk. I don’t blame the writer for their lack of communication of what folk is. The writer takes a quote from another musician on campus saying, “born with a feeling, putting into words and given a melody”.

I’m also impressed that the article recognizes the debate between the self-labeled purists and commercial style that came from record labels selling folk as a specific style.

As discussed in class and in the beginning of the article, this genre is incredibly difficult to grasp conceptually. I’m impressed for an early 60s article of St. Olaf of how honest the writer is about genuinely not knowing to answer the folk question. They provide certain musicians’ definitions but never make a solid claim on folk music. My only issues with this article comes from its failure to acknowledge the racial component within the broad genre of folk. Part of the reason folk has so many different styles within this umbrella genre is because of the exchanges made interracially throughout the late 19th and early 20th century.