In 1966, a group of grape workers organised by famous labor leader and activist Cesar Chavez marched 300 miles from Delano to Sacramento, CA to protest the low wages they worked for. While they marched, they sang a variety of songs, including both pieces in Spanish, known to the majority-Latino workers, as well as traditional union songs – a category of American music that I didn’t realise existed until finding a video source for this blog post. Here you can hear a classic union anthem, Solidarity Forever, the melody of which you will probably recognise. Below are the lyrics.

When the union’s inspiration through the workers’ blood shall run,
There can be no power greater anywhere beneath the sun;
Yet what force on earth is weaker than the feeble strength of one,
But the union makes us strong. 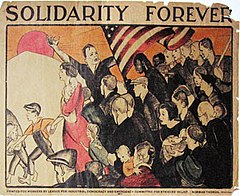 They have taken untold millions that they never toiled to earn,
But without our brain and muscle not a single wheel can turn.
We can break their haughty power, gain our freedom when we learn
That the union makes us strong.

In our hands is placed a power greater than their hoarded gold,
Greater than the might of armies, multiplied a thousand-fold.
We can bring to birth a new world from the ashes of the old
For the union makes us strong.

There are a further 3 verses, somewhat different in tone. They are aggressive, proclaiming the evils of the wealthy who the unions are working against, and the comparative goodness of the union members. This dichotomy is probably not what was used in actual negotiations with the growers in order to get wage increases, as calling some one evil tends to not make them want to treat you very kindly. However, putting yourself of the side of justice and right does make for a very compelling and energizing song when you’ve decided to walk several hundred miles to make a point.

This type of music has some interesting nationalistic parallels, as does any music whose goal is to unify people for a common cause. This kind of parallel seems somewhat concerning to me at first glance, because anything that dehumanizes some people in order to lift others up is not a sustainable way of viewing the world. However, it’s worth remembering that humans, by nature, must simplify and group things in order to understand the world and not be constantly overwhelmed and paralysed by its complexity. As long as songs like this are able to serve their role in empowering and motivating people through trying times and also understood in a more complex way in their particular context, they can be a helpful, not harmful, tool.