Now that rehearsals for Christmas Fest have begun, I thought it might be time to talk about every musician’s favourite (and longest) season of the year. The amount of Christmas and Christmas-adjacent winter music that musicians of all stripes play during the end of fall and winter is staggering. This is as true for pop musicians as it is for classical musicians, and it has been since the days of Tin Pan Alley. In fact, the origins of much of the most-played Christmas music comes from the times and artists that we’ve been discussing in regards to the sheet music extravaganza that was the early 20th century. 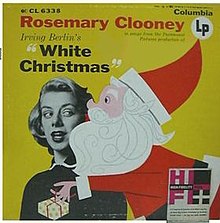 Think of Irving Berlin’s “White Christmas,” or the many Christmas songs sung by old-time crooners like Bing Crosby. If you’ve been exposed to this music anywhere near as much as I have, the voices of these singers (along with a good 3 or 4 other arrangements) will pop immediately into your head. Much like the sheet music of the 1890s to 1920s, Christmas music floods the market every year in such quantity that there are many, many hits to be drawn upon. As Horacio Lopez discusses in his Manitou Messenger article, “Music on Trial,”  almost every artist that you can think of has released a Christmas album, be it Pentatonix, Nat King Cole, Kanye West, or R.Kelly (to mention a few of Lopez’ examples). Whether the majority of this massive musical output is any good is very much a matter of opinion. Lopez, calling himself Grandmaster Ho (presumably in reference to Grandmaster Flash and other hip hop icons), in fact doesn’t seem to like almost any of the songs he mentions. Instead, they are primarily sentimental to him, being from albums he was gifted or heard at Christmastime.

On the other hand, Andrew King of Canadian Musician thinks that all the vast quantity of Christmas music has value, even if some of it the unifying force of people’s annoyance at hearing the same songs over and over again. He challenges his readers to seek out new or less-traditional Christmas songs, and to keep searching for the musical value in these pieces.

His argument reminded me of Dr. Epstein’s discussion of sheet music, in which the quantity of music makes said music simultaneously worthless and priceless. Claiming Christmas music as a unifying cultural force is certainly problematic – it comes from a Christian tradition drawing on pagan traditions, and isn’t representative of or important to a lot of people. However, here in North America Christmas, especially Christmas music, has an unquestionably lengthy reach into our collective cultural experience.