This week was the first time I was able to really sit down and skim through materials useful for my final essay. Overall, I am interested in understanding Chicago concert music life between 1915 and 1930 to show that geographically limited micro-histories help us better understand musical life (as opposed to blanketing all music making under a period marked as a precursor to the Chicago Renaissance). Two books in particular, From Spirituals to Symphonies: African-American Women Composers and Their Music1 and Racial Uplift and American Music, 1878-19432 make something very clear: community and camaraderie were vastly important to American composers, especially African-American ones. During my time at St. Olaf, part of which I thought I was going to major in composition, the “composer” stereotype described a person who spent most of their time locked in a room alone, maybe with a piano, writing. However, this representation shows no grounding in the black artistic communities of Chicago. 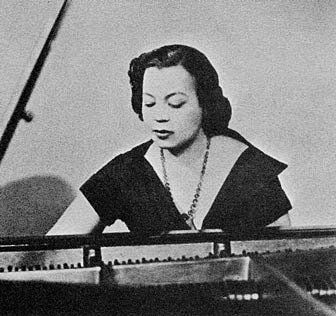 One great example of such a community surrounded the composer and pianist Margaret Bonds. Bonds grew up in Chicago and learned to play piano from her musical mother, Estella Bonds, and Florence Price. She attended Northwestern University, and continued to teach and work in Chicago until age 26. In addition to her mentors Florence and Estella, her writings and letters reveal some of the most reputable names in black artistic life. For example, early in her career, Bonds worked with prominent soprano Abbie Mitchell. And early on, Bonds was introduced to Mitchell’s then husband, Will Marion Cook, marking the beginning of a life-long working relationship.”3

Or for example, the beginning of Bonds’ friendship with Langston Hughes:

“I actually met [Langston]…after I came out of the university. The first time I saw Langston was at Tony’s house in Chicago, Tony Hill, the ceramicist. Finally he came to my house. My family rolled out the red carpet. We were like brother and sister, like blood relatives.”4

My initial reaction to reading these letter excerpts was, “Wow Margaret was popular”. I’m sure that it was partly because of the political environment — because African Americans were shut out of other communities, they especially relied on one another. While this might have been true to a certain extent, why was I surprised that this musical community was so intertwined? Humans are social beings. We spend our lives building connections that produce more connections. However, maybe I was surprised because of the way we are traditionally taught history. In my experience, the names of community members, families, or others who helped the success of one person are often left out of history. This is especially when it comes to celebrities. I hope that in the future, these names will be included more and more.

3 Walker-Hill. From Spirituals to Symphonies, 148.