When asking American music students to name a distinctly Black style of music, most will jump onto the term “Spiritual,” or even “Negro Spiritual” if they feel the need to be more precise (as though we ever refer to sacred songs by White composers are “White Spirituals”).  This shows some kind of link between Black music that has been made popular in the Western Canon and the Christian faith.  Are all instances of Black music in the historical canon from the Spiritual tradition?  Or is that just our personal biases and preferences creeping in.

I’m sure you can tell by the way I phrased it that the answer is no, since of course not every instance of Black art music comes from a background of Spirituals.  Only a Sith would deal in such absolutes.  What may be more accurate to ask is why we have formed such a close tie between Black music and Black spirituality, and what makes that tie different.  Even Black newspapers seem to make this connection, with the Chicago Defender titling an article “Presents Black Music” (Oct 11, 1975) to describe a church’s choral program’s opening concert featuring exclusively spirituals and hymns written by Black composers. 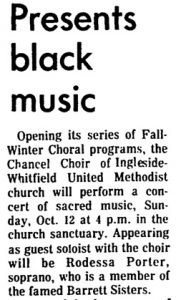 There is no qualifier in the Article’s title, but it does go on to specify it is a concert of “Sacred Music.”  So why is it referred to as “Black music” and not “Sacred Music” or “Black Sacred Music.”  If it were a concert of only white sacred music, it would simply be called something vaguely inspiring with a Bible verse with no reference to race.

This must indicate some subconscious association with Blackness and Spirituality, perhaps best exemplified by a well-meaning, but woefully ignorant, lady in my church choir, saying, “Those Blacks sing so well because they put the Father, Son, and Holy Spirit – oh I’m sorry I mean the Holy Ghost as they call it – in every note.”  It is certainly a pervasive concept in our collective consciousness that Black singers excel at being Spiritual, but our acknowledgement of the excellence of Black singers in other regards have nothing to do with their race.  When we talk about Lawrence Brownlee, his race and spirituality stay out of it until someone brings up his performance of Spirituals.

I’ll only posit one possible reason, since I am no expert on cultural consciousness and race, but I have seen quite a bit.  Spirituals and Slave Songs (which are almost always sacred in some regard) were among the first types of Black music to become truly popular.  The Fisk Jubilee Singers in particular helped with that becoming the first American ensemble to tour internationally, bringing an entirely sacred style of singing to the world.  I would argue that since then, our ability to separate Blackness from Spirituality has diminished greatly.  This may have nefarious purposes in stereotyping Black people as overly emotional or passionate, but could just be an honest inability to separate from our initial impression (this phenomenon is called Reference Dependence in Behavioral Economics, and plays a huge role in your willingness to pay certain prices for certain items).